Those of you looking for a short review with no personal preface… move along, there’s nothing to see hear. For all others who choose to take a brief walk down memory lane with me, here’s a Werther’s Original and some fruit punch. Thanks for takin a knee and listening to my rant.

In second grade there there was a kid in my class that by all accounts and purposes LOVED outer space. He wore the Nasa logo on bookbag, t-shirt and even lunch box and during any recess you could see him playing with a scale space shuttle, sending its tiny occupants on dangerous life threatening missions in the cold unforgiving confines of space. It was no surprise that when it came time to present a paper to the class on our favorite hobbies that he hastily trotted to the front of the class, scale model and diorama in tow, ready to impart on his peers his wisdom on man’s interplanetary travels. The entire class waited with baited breath to learn about the miracles of space travel as only this boy, apparent prodigy and budding astrophysicist, could. What followed was the most incoherent, pointless, yet enthusiastic display of one boy’s passion gone wrong. Sure, he loved space, but how this kid could make it through his bedroom without a helmet, tetanus shot and gps was beyond me. As impassioned as he was, he still ate the orange before peeling it and a classroom full of students found themselves horribly disillusioned to the fact that the clothes do not make the man and Nasa shirt or no, this little boy was a disorder away from riding the short bus.

This might seem a little harsh…ok…maybe even a tad prickish, BUT what it amounts to is that I am tired of giving Rob Zombie a get out of jail free card. For a guy who talks the talk, the horror world has been collectively waiting for him to “walk the walk” and give us a kick ass horror film. Instead, Zombie eagerly skips to the podium, copy of Famous Monsters of Filmland in one hand Aurora model kit in the other and slobbers out a barely coherent, ” I like werewolves.” We know Zombie has done his homework. He is an articulate, well spoken guy that loves an industry that he has strove to become an icon of. Zombie, to many, is a walking billboard of the super-fan. He loves horror. It shows in everything he does, everything he wears and even the tattoos that he sports. He is LIVING THE DREAM. It is difficult then to near the end of Lords of Salem with a yawn and tilted head, complete with quizzical expression and maybe a little bit of indigestion.

House of 1000 Corpses showed Zombies eagerness to create a mythology. I was a rough around the edges urban legend that as much as it felt like a freshman effort, was still a brutal good time wrapped in neon. It was goofy, a little silly and sometimes too self important where it shouldn’t be, but it had just enough pinache for a repeat reviewing. The Devil’s Rejects as a follow up represented a more mature sophomore effort that caused many reviewers to recognize Zombie as a filmmaker. Though more of an exploitation film than traditional horror vehicle, it represented a more refined and focused Zombie. It is easily Zombie’s best effort and left a lot of us hopeful for his return. Sigh. Zombie’s Halloween films represent a misguided effort that should I truly want to dissect would leave me more than a little winded. The core of Halloween is an evil that simply has taken shape, wrought of hate, malice and brutality and leaves the audience wondering if Myers is devil , demon or just our darkest corner of humanity, sprung from our nightmares. It is NOT an examination of nature vs. nurture, which Zombie’s interpretation kept beating us over the head with. Which, brings us to Lords of Salem.

Sheri Moon Zombie plays Heidi Hawthorne, one of a trio of celebrated Salem, MA radio DJs dealing with life after addiction. Closing in on the Halloween holiday the station receives an enigmatic vinyl record by a group calling themselves The Lords. The song, when played over the airwaves disorients the fairer sex and soon Hawthorne finds herself part of a centuries old plot involving black magic, revenge and Bruce Davison. We get glimpses of a couple of genre veterans along the way (the lovely Barbara Campton, whose airtime was considerably cut, Dee Stone and a few others) as we are brought along Hawthorne’s decent to quickly become a vessel for the devil. Although all of this sounds intriguing enough (hell, it worked in Rosemary’s Baby right?) we just don’t get to linger enough with any of the characters to really care about the events as they unfold. Sheri Zombie is a capable enough actress but her character is so difficult to relate to that we don’t feel the danger here. THAT is one of the major missteps at the heart of Lords’ failure. With a slow burner like Lords we really need to feel our heroine’s pain, her confusion and ultimately her fear. We just aren’t brought close enough to her to allow us the opportunity. SO she is a late 30’s (Zombie actually being 42, but who’s counting) hip, socially unapproachable lass with a cool job, an out of this world apartment and a wardrobe that falls somewhere between 70’s sex kitten and Tim Burton stop motion. Yeah, you know… everybody’s sister, best friend and girl next door. Most of the time I just felt like I was watching that cute girl in my industrial sculpture class who touted herself as a woman of the world until you struck up a conversation with her and found out that she was as vapid as Tyra Bank’s high school journal: “Dear Diary- I know I’m pretty but… sniff sniff.. sometimes I just don’t feel.. you know… pretty”.

Davison always shines as the researcher come curious protagonist, but his part is cut short just before he’s allowed to become interesting, which is the other misstep that ultimately proves to be Lord’s undoing aside from its lack of character development. The audience is left with the feeling that all the interesting parts are somehow happening off-camera. A trio of witches seek to influence and corrupt Heidi, but their mechanisms or the origin of their dark alliances are never truly embellished. The female citizens of Salem are also affected by this evil, yet we are rarely shown the gravity of it, even in the periphery. Hawthorne’s addiction seems to be the crack in the veneer that lets the horror take seed, yet we are barely treated to the depths of her prior depravity. Nothing seems to have any real weight in Zombie’s Salem and that brings me to my lil whiny boy, “look at where I take my vacations” and “he just doesn’t seem to get it, man” criticism.

I used to spend my Halloweens in Salem. It is truly the Mardi Gras of Halloween and every crack, sidewalk and brick of the city oozes atmosphere. SO much, in fact, that is difficult to forget where you are. Around the holiday it is part street fair, part carnival, part hall of mirrors and part parody of what started it all, BUT it is all VERY Salem. Its almost as if Zombie loved the title, yet couldn’t quite fit it into his shooting schedule to pull any exterior shots that create the illusion that we are actually there. Witchyness aside, this easily could have been called The Lords of Portland. Yeah, I’m serious.

What all of this does is take away from the fact this is easily Zombie’s most well crafted and aesthetically pleasing film to date. It shows a deftness of filmmaking that is so undermined by the film’s overall mediocrity that we miss some truly beautiful cinematography by Brendan Trost, a haunting score by John 5 and a restraint in Zombie’s direction that finally show’s the artist sense of placement and pacing. Finally, it is this mediocrity that cripples the film, turning some of its more memorable images against themselves, leaving us with little more than middle of the road fare that searches for, but quite never finds its identity. 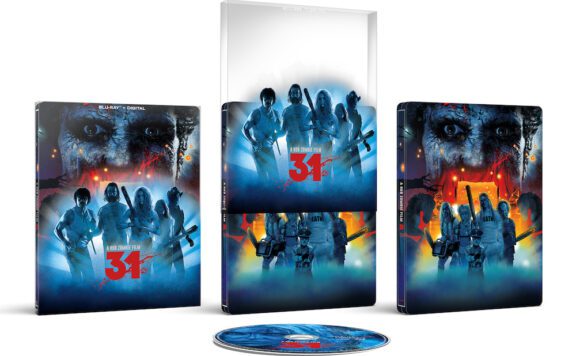