Recently the Rotterdam International Film Festival (RIFF) hit the Netherlands. Honestly, it took me by surprise. I am usually so focused on the Amsterdam festival (Imagine) that I hadn’t considered that Rotterdam’s go at the film circuit might have had a gem or two for us bloodthirsty horror hounds. Luckily, the festival reached out and played films outside the Dutch port city, which is why I managed to catch a pretty awesome screening in our small city of Groningen. I have to say, I’m really glad I caught the screening + concert event on our local cinema’s program, because what I got was a pretty special and mesmerising experience.

First of all: the film. Only Lovers Left Alive is Jim Jarmusch’s foray into the ever popular vampire genre. That’s right, the same Jim Jarmusch who turned Forrest Whitaker into an ass-kicking urban samurai and Johnny Depp into a thoroughly dark cowboy is at it again. This time he’s transformed boy toy Tom Hiddleston and otherworldly veteran Tilda Swinton into ancient vampire lovers. I know, I know. On paper that sounds like the most irritating and uninspired storyline to hit the big screen in years, but keep reading you may be surprised.

The film’s story revolves around Adam (Hiddleston) and Eve (Swinton), and how their relationship has both evolved and fallen apart over countless years. It is never explicitly stated whether these characters are the Adam and Eve of Biblical fame, but there are definitely some hints that lead in that direction. Eve, together with her close friend Christopher Marlowe (played by John Hurt…and yes THAT Marlowe), does her best to enjoy her existence deep in Morocco, while Adam secludes himself in an old Detroit mansion to work on various art projects and, in the process, find a way to block out the horrors of human life around him. Upon hearing some rather disturbing statements about existence from Adam over the phone, Eve decides to visit her long distance lover and to revitalise his sense of self worth. 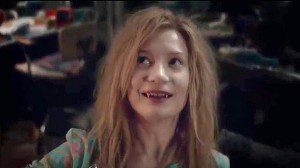 Enter Ava (Mia Wasikowska), Eve’s younger “blood relation”. Ava is highly unpredictable, volatile, and care-free…the complete opposite of Adam and what he stands for. Trouble ensues for the group, and it’s up to Eve and Adam to fix everything.

It all sounds a bit hokey when you sum it up, but Jarmusch has managed to take a fairly simple (if not a tiny bit silly) concept and make it a rather breath taking experience. Hiddleston and Swinton are perfectly cast and have a sort of chemistry I haven’t seen from an onscreen couple in a very long time. Their relationship is loving, playful, and tragic all at the same time. Hiddleston plays the quiet, brooding artist superbly, but it’s Tilda Swinton’s performance as the complexly chaotic yet serene elder that steals the show. Seriously, after seeing Only Lovers Left Alive I have to wonder if Swinton is really a vampire or not, she fits the role that perfectly. The rest of the cast add a proper amount of salt and pepper to season up an already delicious recipe.

Apart from the performances, what I found really glued the whole film together was the music composed and performed by both Jozef van Wissem and SQÜRL (Jarmusch’s band). Most of the music used in the film ties together with the in-world music that Adam creates to get over his depression. It’s this dark yet otherworldly vibe that composer Van Wissem brings to the forefront in the majority of the film’s score and the result is quite mesmerising. Not only does the score accompany what is happening in the story thematically, but Jarmusch’s camera work seems to live perfectly in the same world as the music. Together the image and the music make this film step out of mass release status and sink its feet deeply into art house territory.

This is not a vampire for the gorehounds, though. There’s blood, don’t get me wrong, but it certainly isn’t the primary focus, nor does it come in buckets. In fact, you could easily strip away the vampire aspect of the film and get an equally effective film. However, I really felt that the usage of vampire lore, mixed with literary and scientific references, added an extra dynamic and I was pleased to see a filmmaker tackle our beloved fanged genre from a completely new direction. Yes, there’s love. Yes, there are real emotions on the forefront, but Only Lovers Left Alive manages to keep itself from ever veering off into melodrama territory, and instead grounds itself with the love story in a way that is ultimately pleasing for a wide range of viewers.

Now on to what made this particular screening so special. Not only did I get a chance to catch this film before its wider release, but composer Jozef van Wissem himself was present during the screening. Afterwards, he gave a very small and intimate free concert of various tracks from the film. While I had hoped to hear some of the more atmospheric pieces based on Adam’s in-world music, Van Wissem was on his own and gave us all something even more special. He performed solely on a lute and completely blew everyone away. The lute was used heavily throughout the film, primarily in the scenes that took place in Morocco, but it was rarely played on its own. Thus, what we all got was a wonderful demonstration of the raw compositions of some of the more familiar tunes heard during our screening.

Now, I’ve never been a massive fan of the lute, to be honest, but something about the composition and the way Van Wissem played the instrument was just magical to me. He cradled the lute like it was a dear and fragile child. I have never been present during a live performance of a composer’s film soundtrack before, but it was amazing to see how deep into the music Van Wissem went when playing. It was as if he had drifted off into another world…which was quite an experience.

He played for about 45 minutes (give or take 5 tracks) and rounded the night off with a final piece where he walked through the audience to give everyone a moment of a private show. It was a simple gesture, but somehow the lute and his whole demeanour made it a very powerful gesture.

If you ever get the chance to see Van Wissem perform the soundtrack live (and there are opportunities in the near future for France and England) I highly suggest doing so. You can thank me later.

(You can’t put a score on something like this.)

The soundtrack to Only Lovers Left Alive will be available for purchase as a CD and vinyl on February 17, 2014. For full details go here.