I starred in a series of wild, nasty, crazy horror movies that I really didn’t think anybody would ever watch. And now, I can’t say it’s 25 years later because, being that I’m only in my late 20’s, that much time couldn’t possibly have passed.”

With that humorous quote, we enter the first of several top notch features in the new Collector’s Edition Blu-Ray of one of the lost classics of the 1980’s, “Night Of The Demons”, an interview with Angela Franklin herself: Amelia Kinkade.

You would be hard pressed to find a true horror fan who doesn’t know of this film. Among Jason Voorhees, Freddy Krueger, and Michael Meyers, Angela and the Night Of The Demons films have become cult icons among horror and slasher enthusiasts. This is true, but there are several major things setting this film apart from other films of this ilk.

1. The villain of the film and franchise is female.

2. The black character not only lives, but saves the day.

3. Nobody dies in the first half of the film.

The plot centers around a group of misfits who gather for a Halloween party at a supposedly haunted mausoleum, Hull house. We are told all kinds of gross and over the top stories about the house involving a flaming maid, a necrophiliac mortician, and a cannibalistic Native American. These kids all drink and make crude jokes and ogle Linnea Quigley for a decent interval before things go bump in the night. Before you can apply your lipstick, they are being possessed one by one, eyes are being gouged out, strobe lights and Bauhaus are setting the scene for an unforgettable dance sequence, Hal Havins is quoting John Belushi, and Angela herself is “warming her hands in the fire”.

Originally titled “Halloween Party”, this film was helmed by “Witchboard” director Kevin Tenney. Tenney certainly has an eye for detail and creativity. This is obvious in his use of innovative camera shots. Few other films that I have seen have drawn me into crude conversation and exposition quite like NOTD and this is all because of Tenney’s shot selections, the intriguing logic of the script, and how much fun the cast seems to be having. 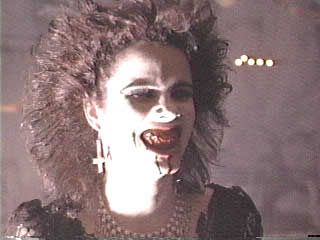 A lot has been said about this film in terms of it’s cult status. Scenes like the lipstick sequence, Angela’s dance, an old fart getting his just desserts, and others are commonplace in reviews. But what strikes me about it is that the film is wild and silly, but also very creepy at times. Watching the Blu-Ray, I began to notice how much of this is due to the score by Dennis Tenney, Kevin’s brother. The synthesized score really works to the advantage of the film. The sounds almost haunt as much as the imagery: A low moan during the reveal of Angela’s fiery hands, the high strings at a jump scene, the rapid beating tones as Quigley’s transformation in the bathroom creeps under our skin.

In addition, The film also features some great punk and rock tunes by Dennis that are all over youtube. These include Computer Date, and a personal favorite of mine, The Beast Inside. In short, neither your eyes or ears are bored during the film.

The film is also filled with fun little convo topics for fans. What is the main demon’s motives? Did Judy actually sleep with Sal? WTF happened to Helen???? In most films, these questions would burden the script. But in capable hands, they become the slasher equivalent to “What is in the briefcase in Pulp Fiction?”.

The Blu-Ray itself is a true gift to fans. A 70 minute behind the scenes look back feature treats us to interviews with nearly all of the main cast and crew. In addition to shedding much light on the film, we are given such gems as Havins joking about his famous line: “Eat a bowl of… pudding I think it was.” Everyone seems to look back very fondly on the project and with good reason.

Also, Kinkade is given a 23 minute interview where she discusses how she became involved after wowing the filmmakers with her dance skills and scaring the casting director during her audition.

This feature was my favorite as she also discusses to an extent the two sequels that she appeared in and shows her admiration for everyone involved.

She is not alone, as we are also given actress Allison Barron’s personal memories of the film. Showing us a scrapbook of BTS pics that are enlightening. I do wish someone would explain to me, as I said earlier, what exactly happened to her character. But in all honesty, sometimes it is better to use your imagination. Even with a film as dazzling as this one.

The Collector’s Edition also includes a DVD copy, trailers, TV spots, and several nifty galleries. I don’t think you can love 80’s horror and not be a fan of Night Of The Demons. Nor do I think you should go too terribly long without adding this extravagant Blu-Ray to your collection.