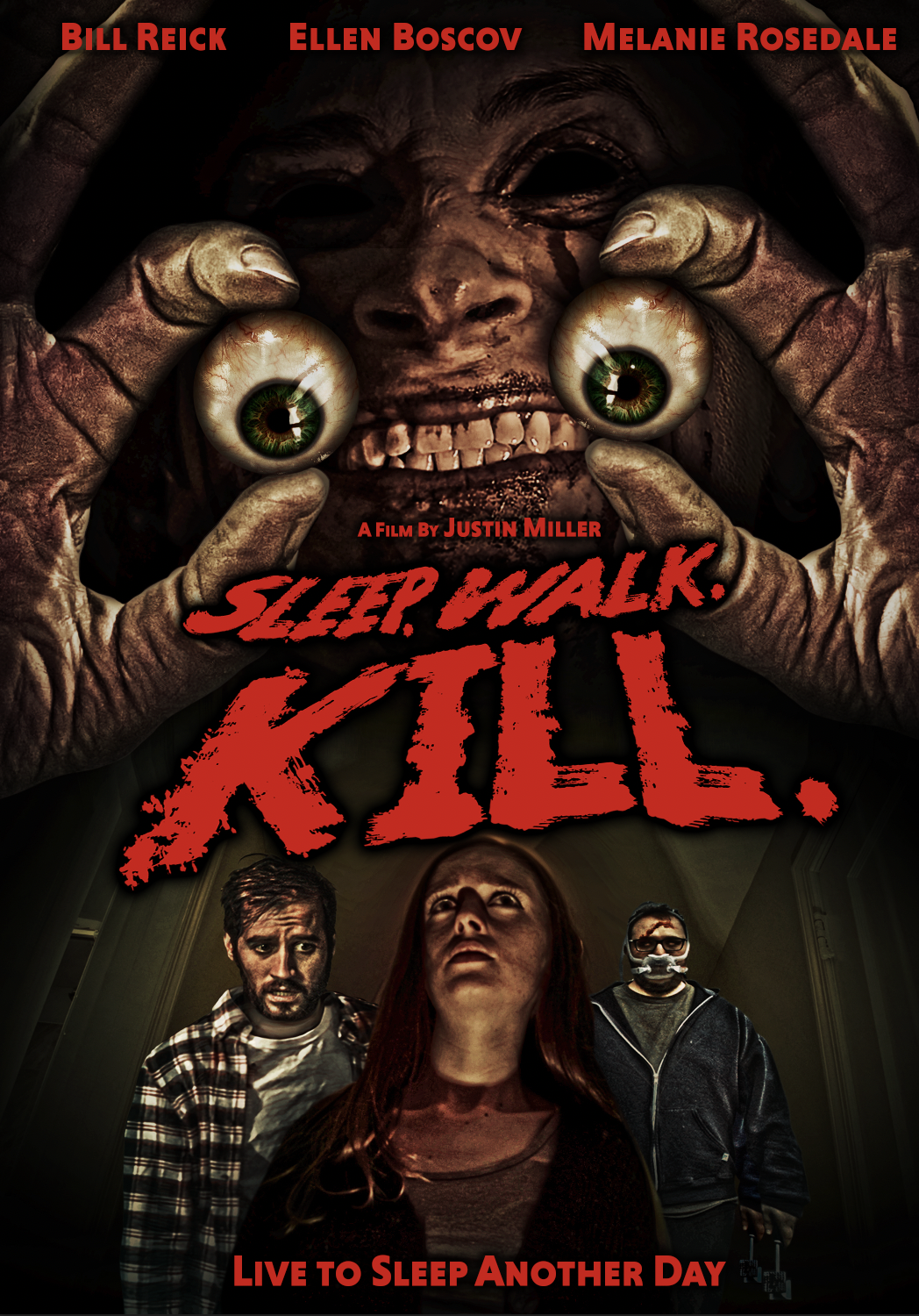 If you sleep, you become one of them. News reports tell of an Earth-shattering sound heard along the entire East Coast. Nobody knows where it came from. Nobody knows what it means. That night, people start walking in their sleep. And killing in their sleep. When the screaming stops and the blood dries up, the ones who are left have to work together to stay alive. Heads will roll, eyeballs will fly, but for EDGAR, hell is still just other people. His ex-wife, his parents and all his neighbors are hiding out at his house. And they’re even worse than the flesh-eating sleepwalkers.

Sleep. Walk. Kill. is horror filmmaking at its most independent. A motley crew way outside of any system made a movie because that’s what we wanted to do. For some of us, it was our first feature. It represents our admiration for the genre, our aspirations as filmmakers, and years of hard work. This is a message-in-a-bottle we hope will reach like-minded misfits. We did it all for the love of horror, and now we’re sharing that love with you. Thank you for taking time out of your life to check it out.

Ellen Boscov (Mom) is a multidisciplinary artist: actor, composer, and writer. As an actor, Ellen has worked in numerous indie films. She was thrilled to act with Terry Kiser (playing his sister) in the feature horror Dark Circles (2022), directed by Hannah Fierman. Ellen also had the pleasure of acting with Joseph R. Gannascoli in the feature film, King Lahiri (2022), directed by Christopher Picone. She is looking forward to performing a lead role in the feature film “We Don’t Dance No More” directed by Todd Verow (2022), and the feature film, “Bottom Feeders”‘ directed by Vincent D’Alessandro (2022). Ellen won “Best Lead in a feature” at the VIPCO Vaults of Terrorfest 2021. And the film, Sleep. Walk. Kill. (2021), won “Best Feature.” Ellen has also enjoyed acting in theater and performing improv comedy in many venues.

Samantha Russel (Ady) is a sketch comedian, vintage clothing enthusiast, and cat ambassador. She is a member of Philadelphia’s longest running sketch troupe Secret Pants and the comedy duo Russell & Craig. Additionally, Samantha was the director of Goat Rodeo and a member of Youth Large. Samantha can be heard on the podcasts “Breaking Goodman” & “Canned Peaches” and seen on Instagram in pictures with her cat.

Bill Reick (Edgar) is a writer and comedian from Philadelphia who currently lives in Chicago, where he performs sketch and improv comedy. In addition to appearing on screen in Sleep. Walk. Kill., Bill also produced this movie, a first for him. Bill’s an avid horror fan too, and you can find his writing all over the internet.

John Reshetar (Paul) was born in Reading, Pennsylvania. He attended DeSales University in 2006 and graduated in 2010 with a focus on theatre and communications. He shifted his gear towards more film work in 2014 with his first starring role in Philadelphia: The Great Experiment then working with M. Night Shyamalan in the film Glass (2019). Represented by Reinhard Agency in Philadelphia and continues to act on camera and write for the screen.

The Legendary WID (Uncle Pat) is the greatest prop comedian of all time. I’m serious. Look the guy up. He’s got a resume longer than anyone in the biz, and he’s respected from top to bottom. Check him out on YouTube, or if you’re lucky enough to live near Philly, you might be able to catch him live.

WRITER/DIRECTOR
Justin Miller lives with his daughter, wife, and dog in Yardley, PA, and is proud to bring independent filmmaking to his hometown. Combining his love of horror films and his experience as a staff writer for the Philadelphia sketch comedy group “Goat Rodeo,” Sleep. Walk. Kill. is his debut feature horror-comedy.