Looking Beyond the Face in The Faceless Man.

There are voices within all of us.  The quintessential angels and demons.  Dissonant whispers making our lives harder to confront because they cause us to wage a war on two fronts.  One external.  One internal.  This psychological duality rears its ugly two-headedness in the horror film The Faceless Man.  Borrowing from the classic slasher thriller setups of a group of young adults planning a trip to a rental condo in the country for a weekend of the “Big Three:”  Drinking, Drugs, and Debauchery.  This is where the The Faceless Man (written and directed by James Di Martino) ceases to borrow from the atypical tropes of horror weekend slashers.  From the opening scene, prior to the weekend getaway setup, we find out that main character Emily (played by Sophie Thurling) is recovering from a battle with cancer.  She has struggled with the horrors of chemotherapy treatment, as well as the realization during a visit from her unscrupulous father that he has used her unfortunate condition as a means to further his own political gain.  Three years later, Emily has made a full recovery from the cancer infecting her body, but we begin glimpse that the trauma of both fighting the horrible ailment coupled with the mental abuse of her father’s ambition has begun to unleash something much darker within Emily’s psyche.  Or, is her manifestations real?

This theme of ambiguity is echoed throughout the film.  Who is the real Faceless Man?  The true monster of the film seems to be the surprisingly large cast of morally corrupt characters packed into this film. Di Martino breaks standard tropes of not establishing clear lines in the sand of good versus evil.  The show’s assumed protagonist seems to be struggling with her own morals, and sanity from the beginning of the film.  The moral compass of every character in the film spins uncontrollably, giving further rise to the psychological fluidity and general paranoia that overlays all the scenes in the movie.  Sexually depraved friend-zoned companions to overly sexualized Casanova movie stars segue to seemingly harmless cancer survivors and ruthless Mafia bosses and biker gangbangers.  Then, add in drug-fueled hallucinations of women wearing featureless masks in a orgy scenes reminiscent of Stanley Kubrick’s Eyes Wide Shut and a creeping infectious lack of control over reality in every scene with the supposed main protagonist,  you have a recipe for slasher bedlam.

No one is safe in a world of mental mayhem, and this film creates an aura of anxiety from beginning to end.  Once the second act has been established, it felt as if I was watching a demented game of Clue being played out, but Professor Plum roofied everyone, Colonel Mustard pissed off a bunch of rapey country bumpkins, and Miss Scarlet was caught huffing bath salts.  Di Martino ensures that the most “morally sound” characters hide the biggest surprises, but admittedly, the wait to see what they are hiding can be a little long-winded.  In a nearly fourth-wall-breaking rant by the leader of the biker gang, King Dougie (played by Roger Ward of Mad Max and Quigley Down Under fame,) the viewers and critics of the film itself are called into question as to whether they can truly perceive who is what side of the fluid lines Di Martino draws out in this film, and even goes so far as to dare them to critique the narrative harshly.

The trifecta of paranoia in the movie culminates in Di Martino’s vision of creating an atmosphere of questioning one’s perceptions of what is reality in the core characters and the supporting casts.  As the viewer of the film, we realize it is supposed to be completely unclear if any of what we are seeing is real or imagined at any given moment. In that discovery, we find the true horror of The Faceless Man. Several times within the film, beyond the obvious post-credit monologue by King Dougie, nods are given to other inspirations for its colorful cast of hoodlums and miscreants.  Guy Ritchie stylized criminal intros, a possibly real/possibly imagined monster with a manicure and mannerisms reminiscent of Freddy Krueger, and even a beach scene that would have brought a tear to Planet of the Apes’ Charlton Heston’s eye all add to the wonder whose viewpoint is Di Martino really trying to show us.  We are left with an idea that the narrative plays second fiddle to what The Faceless Man truly is, an introspection of every character, and more importantly, a deep, troubling, and fearful look into ourselves and the human condition.  Along the way, we are taken on a gory, fun, and disturbing ride into the darkness that nests waiting within us all.

Summary
"we are taken on a gory, fun, and disturbing ride into the darkness that nests waiting within us all"
8
Great 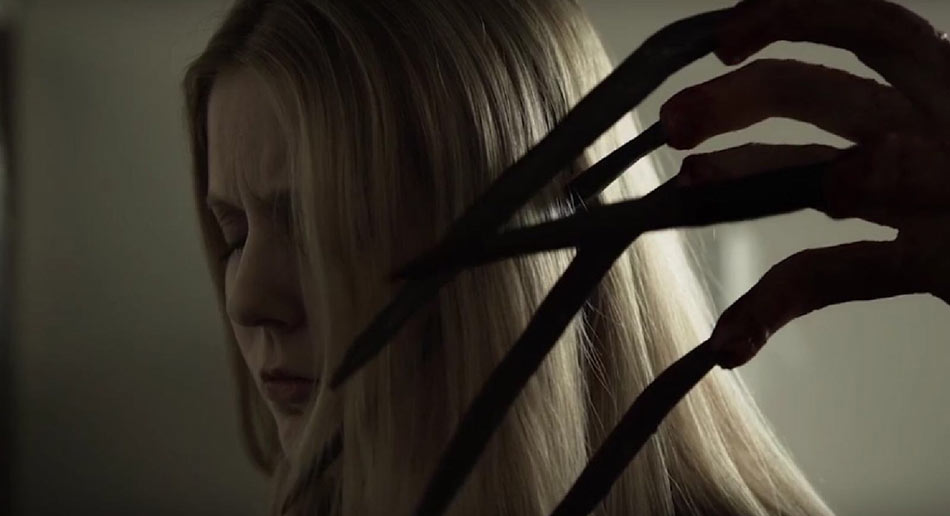