I remember when I first downloaded Aaron Mahnke’s Lore. I was so struck by this podcast and how it filled my head with such incredible stories. The smoothness of Mahnke’s narrative style took stories that I did and didn’t know and brought them to life inside my imagination. Stories that were disturbing, creepy, funny and often times sobering. All the while Mahnke kept the main focus of the show always in view: those insane and cheesy monster/horror stories we all brush off usually have a kernel of truth that they sprung from.

Now we have Amazon Prime producing the series version of Mahnke’s brilliant podcast. While the podcast has only narration and music to paint their pictures, the series is supplemented by established actors bringing the tales to life in the midst of Mahnke’s trademark narration and addition of factoids to supplement the story. They also make use of cartoons in the forms of cardboard cutouts animated to life to illustrate some of the more unpleasant aspects of the tales. In every way, it’s the podcast literally springing to life.

We were given the first three episodes to review before its Friday the 13th release (nicely done Amazon) and in many ways it represents a mixed bag. Overall the series still captures the intellectual yet narrative style of the podcast it’s adapting. The stories flow not so much from a point-A to point-B style but more as an organic exercise of examination of a particular legend or topic.

This is most apparent in the episode entitled “Echoes” which chronicles the work of Dr. Walter Freeman, the inventor of the trans-orbital lobotomy. He is played by the brilliant Colm Feore and in many ways he is the perfect casting. Feore always has a calm intensity about him and it’s a perfect fit for Freeman; a doctor that longed to make a positive impact but ends up creating an entirely new kind of horror from the one he was trying to end.

This episode doesn’t so much show how he grew up or how the idea dawned on him. No, it’s much more about how good intentions can quickly turn bad when coupled with insatiable ambition and ego. That Freeman ends up becoming a monster in our modern times perhaps isn’t fair, but, given the actions portrayed it seems entirely warranted.

Still this episode is the outlier from the other two that take us more naturally through the stories. “They Made A Tonic” is one of the earliest episodes of the podcast and makes for a great history lesson. The action of the story of George Brown (Campbell Scott) and his perceived undead daughter on the surface sounds fantastically creepy. The execution of the episode is a little choppy but the final historical perspective from Mahnke’s narration (which I won’t ruin here) spins the entire thing an incredibly unexpected direction.

But the truly affecting and perhaps the most prescient episode is “Black Stockings”. A big chunk of the Lore podcast concerns how we as human beings create our monsters because of our unique ability to turn monstrous ourselves out of fear. This episode concerns the tragic tale of Bridget (Teen Wolf’s Holland Roden) and Michael Cleary (Cathal Pendred), a 19th century Irish couple that are touched by tragedy when Michael believes his wife has been kidnapped by fairies and an imposter has been sent back in her place. The Irish called these “changelings” and, at the time, identifying them involved truly barbaric practices. 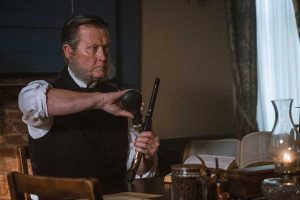 The story feels a lot like a distant cousin of the most famous stories of the Salem witch trials. There are the irrational that hold too firmly to their superstitions, the victims too stunned by the fervor to defend themselves and the silent bystanders that allow the horrors to ensue. In many ways you could call this tale an allegory for our current political situation, but at its heart it is a sad and scary tale of how even those we know the most can turn in an instant into those we fear the most.

Overall, the show has some really standout moments in each episode. I particularly resonated with the opening cartoon narration depicting how it wasn’t always easy to tell if someone was dead or alive and the unique coffins that were made at the time to help with this problem. Or the terror as a wife pleads with her husband to believe she is who she says she is. Or even as simple as a little boy hopping up on a table in a bland, cold medical office.

The biggest problem of the series is balance. Mahnke’s narrations and factoids represent such interesting information that sometimes we long for more of them instead of the actors bringing the story to life. The fact that they got established actors to play these parts is a great stroke of legitimacy to the series as whole and proves that the producers aren’t messing around. This isn’t an experiment to see if the podcast crowd will follow their ears to the screen (although it surely IS that as well).

No, this series is still as fascinating as its podcast origins. It’s like a perfect blending of The History Channel and IFC After Midnight. The show tries to toe the line between gore and subtlety but often it just feels like they don’t know which direction to go. As I look forward to the other 3 episodes there is one that contains a particularly gruesome tale which I will be very interested to see if they go all the way with.

All-in-all, the series gives those that have listened to the podcast a great companion piece and serves as a very intriguing anthology series to those that have never even heard of a podcast. Many have wondered if this will open the door for more podcast to film adaptations. Judging by these first three episodes of Lore, I’m encouraged to think of where the future could take us in this regard. Still, on its own, Lore lives up to the hype.