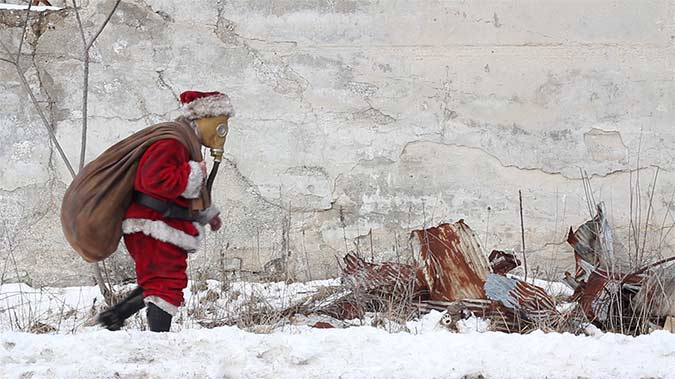 Writer/director Mike Lombardo aligns with author Brian Keene to bring a bleak horror story about a family trying to survive in the post-apocalypse during the most wonderful time of year.

Lancaster, PA – Brian Keene, bestselling author of such notable novels as “The Rising”, “Ghoul”, and “Castaways”, has teamed up as executive producer with frequent collaborator, writer/director Mike Lombardo (The Stall, Long Pig) of Reel Splatter Productions on the post-apocalyptic Christmas horror story I’m Dreaming of a White Doomsday.

Having just wrapped filming in Pennsylvania, White Doomsday tells the tale of Kelly and her son Riley, weathering the end times in a bomb shelter amidst the ruin that once was the world. With supplies and hope steadily declining, Kelly makes a horrifying decision that will cause her to discover just how far she would go for her child, and what lurks outside.

“What started as a short film we were shooting on the weekends just sort of took on a life of it’s own and kept growing until we realized we had a feature on our hands.” says Lombardo. “I’m usually known for doing the more comedic end of horror, so I think fans of Reel Splatter are going to be surprised at how bleak, disturbing, and nihilistic this one is. It goes to some pretty dark places.”

Starring Damian Maffei (Joe R. Lansdale‘s Christmas with the Dead, Closed for the Season}, I’m Dreaming of a White Doomsday will be ready to make it’s way in the summer of 2016.

To learn more about the film: