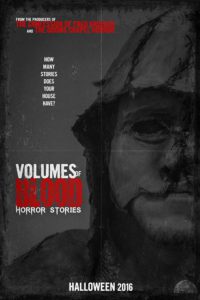 SYNOPSIS: A couple plans to purchase an old home, but would like one last tour before the closing. They’re guided around the estate by a creepy realtor that may have more in store than they bargained for. Searching floor by floor, they begin to discover the remnants of its sordid and terrifying past… A popular 80’s franchise gets a modern upgrade, but at what price? On Halloween night a teen left home alone meets a trick or treater that wants more than just candy. A door to door insurance salesman makes a Thanksgiving house call with monstrous consequences. Andrew and Sara are happily married and plan on spending some quality time together, but something sinister has other plans for their evening. Carol’s Christmas Eve turns into a fight for survival when a vengeful stranger isn’t feeling the holiday spirit. Lastly, a birthday party turns bloody when some unexpected guests drop by at the wrong time. Seven interwoven tales of terror, how many stories does your house have?

ABOUT THE PROJECT: Volumes of Blood: Horror Stories is a sequel to the indie horror anthology Volumes of Blood, now available on DVD & Bluray through LC Films (www.leglesscorpsefilms.com). VOB:HS is well into production and already features actor Moses Moseley best known as one of Michonne’s Pet Walkers on the hit AMC show The Walking Dead, original music by Rocky Gray (musician for Living Sacrifice & formerly of Evanescence) and most recently picked up composer Shane Prather who composed music for Sinister Squad, Lavalantula and Sharknado: The 4th Awakens. VOB:HS will also feature a new single from death metal band Soul Embraced.

Trick or Treat – Directed by Sean Blevins (A Brush With Death)

The Deathday Party – Directed by Justin Seaman (The Barn)