Will O’ The Wisp in a lot of regards is a book hard to categorize. With elements of horror and dark fantasy along with some decidedly young adult themes, the Aurora Grimeon book stands apart from many of Boom’s (the book was officially released under Boom’s Archaia imprint) other titles, the likes of which include Adventure time and highly popular Hellraiser series.

The story centers around young Aurora Grimeon, an adolescent girl who finds herself transported to her grandfather’s house on an eerie isle in the bayou after the untimely death of her parents. Upon her arrival Aurora finds that that isle is rife with superstitions and that hoodoo, a mix of Haitian and Native American magic, is a way of life that the residents follow to an alarming degree. Aurora’s grandfather, Silver, respects the traditions of the cemetery isle, but doesn’t surrender his faith in science to the many rituals the locals observe. Aurora is torn between her grandfather’s science and the magic of the isle and spends her initial time after her arrival pondering her place amongst the people there.

The namesake of the story, the “will o’ the wisp”, a blue flame seen periodically around the island, presents itself to Aurora early on and after talking with several of the residents, leaves her wondering if it might be the protective spirits of her deceased parents or  something far more sinister. The dark past of the isle however has lingered, a dark past that is directly connected to her grandfather and herself, a past bent on taking the lives of everyone on the isle.

Coming in at 216 pages, Will O’ The Wisp is not only an easy read, but a fast one. Aurora is a likeable character and the supporting cast easily ingratiates themselves to the reader. In fact, the supporting cast, with all of their eccentricities, forms a solid backbone to the story and works to create a fun and very believable community. It is writer Tom Hammock’s attention to and love for these characters that breathes a palpable life into the oddities of the island. It is easy to see shades of Neil Gaiman here as Hammock paints a weird and strangely sentimental world that somehow could exist nowhere and yet all around us simultaneously. It is also interesting to point out Hammock’s reluctance to pepper the story with any staples of technology or trend, making it seem somehow more ethereal and timeless.

The book’s illustrator, Megan Hutchison is able to capture the magic of Aurora Grimeon’s world with a deft ease that draws the reader in invitingly, celebrating the murky charm and otherworldly appeal of the isle and its people. Somewhere between Sam Keith and Edward Gorey, Hutchison works her own sorcery in every panel flirting with a painterly style that captures and rends the writer’s words into an anthem of the weird and wonderfully bizarre.

The marriage of Hammock and Hutchison is a fruitful one resulting in a tale that will satisfy readers of any age.  RECOMMENDED.

An Aurora Grimeon Story: Will O’ The Wisp is available at fine comic book stores everywhere and can be purchased directly from the Boom Studios site here. 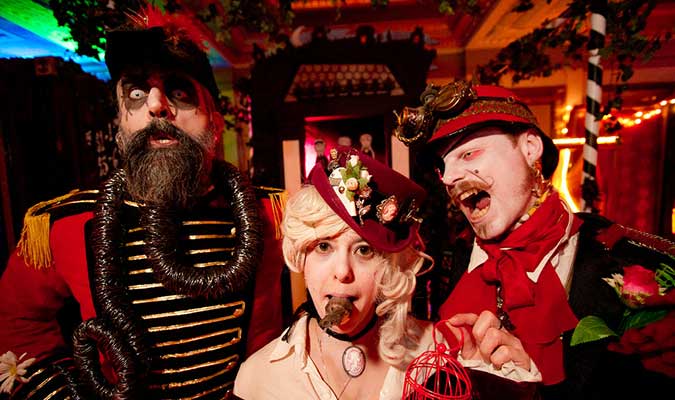