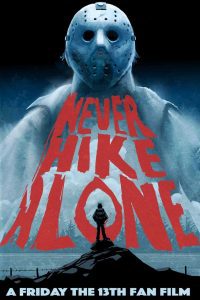 We’ve been following director Vincente Disanti’s Friday the 13th fan film “Never Hike Alone” for a while now. We even caught up with Vincente earlier this year when the trailer dropped (here). With news that the official franchise had been halted (and still no official word on any new entries), Never Hike Alone started to become the holy grail of Friday projects. Disanti launched a successful crowdfunding campaign and we all waited…till today.

I am going to keep this review fairly synopsis free as I think the final product works above its concept and to try to condense its better qualities into a “and then he falls down and then Jason grabs for him” play-by-play is going to undermine the fun that makes Never Hike Alone the best Friday execution we’ve seen in a long time. And yes, you heard me right, NHA is officially the best thing outside of the official franchise that the franchise might have to offer for a long while.

NHA’s titular hiker Drew Leighty is an actor to watch. A likable hero in a series known for peppering its cast with camera fodder is a welcome change of pace and we haven’t seen this formidable an opponent for Jason since the days of Thom Mathew’s Tommy Jarvis.

So…turn those surround sound speakers up, curl up in the yawning darkness of your living room and enjoy every sweet surprise of Never Hike Alone. HIGHLY RECOMMENDED!!!