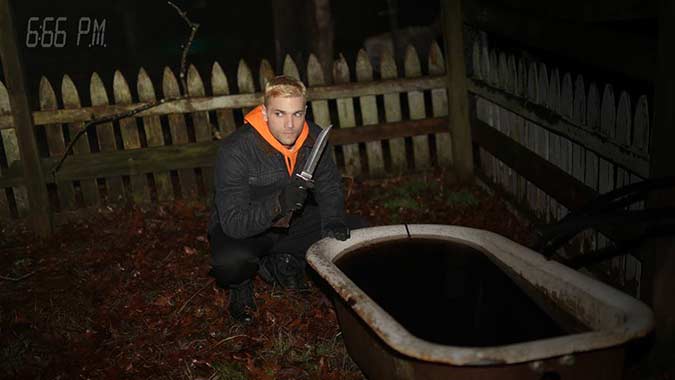 Full Auto Films and Code 3 Films have re-teamed for the horror comedy 6:66 PM. In the film, a group of faux ghost hunters enter the home of a deceased serial killer. But, this killer lives on and he is ready to begin a new killing spree, starting with these supernatural detectives! 6:66 PM was developed by scriptwriters: Chad Ridgely (Massacre on Aisle 12) and Tommy McLaughlin. Directed by “Scream Queens” alumni Jim Klock, the film also stars Ridgely, Autumn Federici (Haunting of the Innocent), and Alexis Kelly (Hell’s Heart). This is Klock’s fourth feature film, in the director’s chair. And, the film’s first teaser is hosted here.

The clip shows more of the action. Serial killer Jimmy (Scott Burkhardt) is forced to make a difficult choice. Not much later, Sheryl (Kelly) and Daniel (Klock) show up at Jimmy’s old killing grounds. But, Jimmy is not resting quietly. He is still stalking his former lair and turning a group of paranormal researchers into a gruesome mess. Can Jimmy be stopped a second time?

6:66 PM will have its World Premiere later this year. The film is slated for a showing at the Buffalo Dreams Fantastic Film Festival, this November. As well, 6:66 PM has already been acquired by distribution house Indican Pictures, for a home entertainment release. This over-the-top comedy will continue a film festival run into 2018. And, viewers can find the latest on this laugh-a-minute horror comedy in the film’s first teaser, found here.

The film’s official synopsis: A team of television ghost hunters gets more than they bargained for. The house, they are pretending is haunted, turns out to be occupied by the evil spirit of an insane serial killer. Their scripted reality show goes hilariously haywire as the demon fights to take possession of their bodies. But can they make it out alive? Only time will tell in this silly case of spooky shenanigans where the body count keeps rising and so do the undead.

More details will be available at Indican, shortly: http://www.indicanpictures.com/