So the time has come for yet another low budget horror romp. This feature comes to us from Brain Damage Films. Anyone who has seen a BD film knows that we are in for some low budget cheese and maybe a good time.

Blood Rush opens in a small town that has been overrun by a mysterious disease of sorts. People are just freaking out and eating anything with blood in it. This could be anything from a side of beef to your neighbor Betty. If it has blood these creatures are interested. It seems there is a witchdoctor living on the outskirts that might be the reason for this plague or the savior.

Within 5 minutes this movie was brimming with stereotypes and cliches. I had originally intended to keep a list but hit about 30 and said, “fu*k it”. Before we go into the many pitfalls of this film there were some things that worked for it.

I really liked the idea of some sort colony, post outbreak, that maintains the small town all while meeting regularly to go over needs and local observations. This really could have been the focus from the opening scene. Plenty of room for emotional acting and character development, but they obviously felt differently about the direction.

Effects wise this had some pretty solid stuff going on. Yes, some of the blood looked a little off color and fake but we can push that off on lighting too. Some of the makeup was pretty good too. I really liked the leg less zombie dragging himself across the lawn and some solid props like when Josh is munching on some local wildlife.

Now it’s time to shift gears into that sh*t list of stereotypes and things that went wrong. Let’s start with the first issue, acting. You couldn’t have made these characters more wooden if you shoved 2×4’s up their asses. The eye rolls and lack of caring for these characters will spill from you throughout the movie. Don’t feel bad though, I think some of them even got paid. 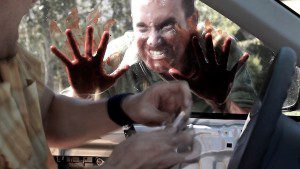 You better be washing that off!

Stereotypes usually don’t bother me and most horror movies rely on them. The trick is to do them well and use them sparingly. It’s safe to say Blood Rush relied on them. We had everything from the zombiefied daughter with the doctor/father trying to find a cure to Emo girl that runs away and hates her life because no one understands her. So now she will eat a bunch of pills and spit them up in tears as random hot dude consoles her. That was long winded but you get the point. This movie is a stereotype.

I totally missed the reason for some of the filters they used on various shots. There were more then a few outdoor scenes with zombies and victims where it looked like an Instagram gray filter. On the other side of that was the use of a bright filter on some indoor shots. At least it seemed like a filter but could have been poor lighting, who knows, either way it did nothing to help the scenes.

I use a pretty decent setup for audio and video when it comes to watching movies. When firing this up I noticed the audio seemed low, so I checked and adjusted a few things. Started it back up and there was still a distance to the audio. I also noticed some very tin can like audio when the group is in the church. Maybe the acoustics were an issue on that specific set.

The story was pretty confusing at points. I had no idea who was fu*king who, who cared about who or who cared about writing a decent story. So the people are not zombies? They’re The Afflicted? How’s that different from a zombie and what is the point of the lusting of blood? So the doctor is the bad guy or it’s the stereotypical black witch doctor up in the hills? At one point a well to do women was b*tching at the town meeting because her internet was down and she could not purchase drapes or something? One big WHAT THE F*CK!?!, should sum this all up.

Pros
Backstory seemed like it could have been cool.
Some cool makeup, effects and props.

Cons
Just about everything else not mentioned under Pros.

This movie is a “skip it like you meant it”. There are countless horror flicks a million times better out there. I could pull up Netflix and have something worth watching in minutes. The movie should be called Bum Rush, not Blood Rush as the cover is about the coolest thing here. 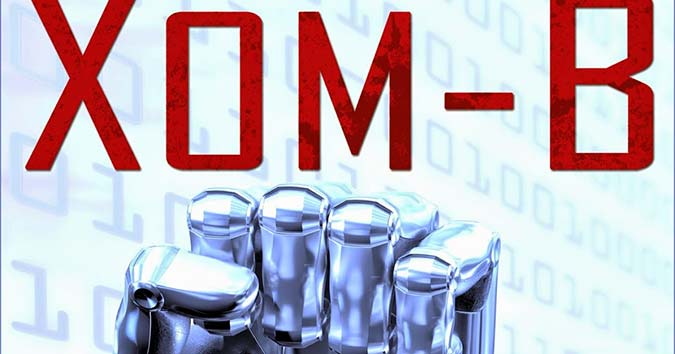