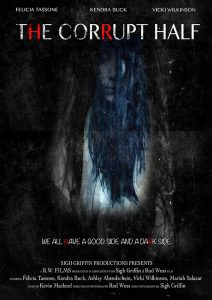 With the outcry over diversity in the past few years, and recent success stories of the likes of Jordan Peele’s “Get Out”, African American filmmaker Rod Wess, debuts his horror/thriller film “The Corrupt Half” in an interesting climate.

The film is Wess’s first feature, after spending the last decade crafting such short films as “The Hidden Chapter” & “Within a Blink of an Eye” both of which earned distribution deals through the “ShortsHD” channel in 2013.

With a diverse cast, led by strong performances from Felicia Tassone, Vicki Wilkinson, and Mariah Salazar, Wess has created a dark and looming atmosphere that is prevalent throughout the film.

“We need more diversity not only in front of the screen, but behind it. We can’t expect to make the next great sci-fi, or horror film if enough of us are not in the room” Wess explained.

Wess’s film is a step in the right direction when it comes to diversity behind the screen. He hopes to inspire other young filmmakers of all backgrounds to make the films they want to make.

“The Corrupt Half” (co-produced by Wess and his manager Sigh Griffin of Sigh Griffin Creative) will be screened later this year at various film festivals around the world. You can view the trailer for Wess’s film here.

When someone takes their own life in the midst of anguish and depression, their soul splits intwo. In 2011, when Natalie Simons decided to take her life, something sinister happened. Her dark half would not leave this world, forever seeking to feed off the souls of those in anguish.

5 years later, two unsuspecting young women, Sarah, and Ashley decide to lease the home, unaware of the evil presence that haunts the residence. When Ashley’s boyfriend Scott, pays a visit, their world is turned upside down when Ashley finds him dead the next morning of an apparent suicide.

Soon after, Ashley begins to see a video of Natalie, who communicates with her through a series of note cards that can be seen on a laptop once belonging to Natalie. Ashley’s roommate Sarah is not convinced, until Ashley commits suicide, leaving Sarah alone in the house.

Once Sarah discovers the dark secret behind the entity, she is left to make a decision that will lead her down a path of darkness, deceit, and murder.