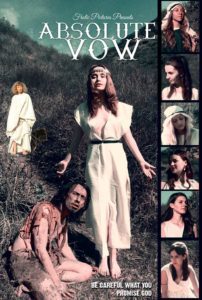 One thousand years before Christ, in an age where pagans ran rampant… Incest and child sacrifices were common place, for false gods that consumed the minds of many wicked men, until the shocking story of a virgin … without a name, made its way into the Holly cannon, and now, fully embellished for the first time, by the Sultan of Sensationalism, Jared Masters. The strangest story in the Bible is finally fleshed out, into a new kind of cinematic experience, starring Parker Love Bowling and her big sister, Kansas, plus Andy Dick’s daughter, Meg, Michael Madsen’s son, Kal, and the infamous Lloyd Kaufman…. The true tale of a mighty warrior. Will he kill his only daughter?

Absolute Vow has wrapped principal photography, that means the film is guaranteed to wind up on the screen of your home and maybe you’re your local theatre. This motion picture is a true story, based on the bizarre tale of Jephthah’s daughter, in the Old Testament. It has been called the strangest story in the Bible. Now, the story is told, and horror fans everywhere will enjoy the shocking cinematic experience over and over again, for this is a timeless tale everyone should see, on glorious 16mm film.

Be careful what you promise God…. A Frolic Picture.