The latest feature film from BAFTA winner Stuart Brennan has just wrapped filming! Set during
the Napoleonic War, “The Necromancer” is a dark, twisted fairytale that follows a group of British
soldiers who flee the battlefield, to return home. Passing through the Black Forest in Germany
they soon find themselves embroiled in a world where everything is not what it seems and
someone is waiting for them…
This is the second feature film from writer/director Stuart Brennan, who has enjoyed critical and
commercial success with his debut feature; Plan Z. That movie picked up the prestigious Best
Director award at Horrorhound (the biggest horror festival in the US) last March and won Best
Foreign Film at the Canadian International Film Festival. He also won Best Thriller at the
National Film Awards in London in March (with 1.8 million people voting) and is expected to
receive a BAFTA Scotland nomination for Best Film, after the movie became eligible with its
extended cinema run in the UK, courtesy of Cineworld. 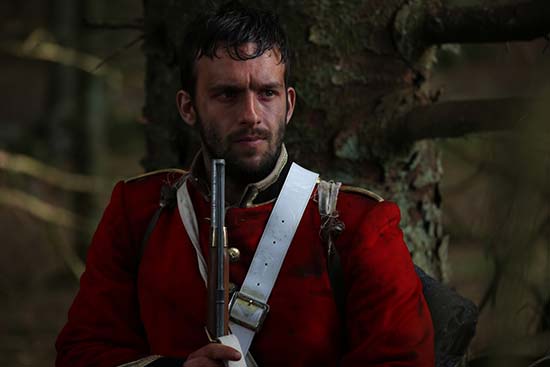 “The Necromancer” stars long time collaborator Mark Paul Wake, new-comers Austin Caley,
David Izatt and Charlie Morgan, alongside Brennan and veteran Scottish actor Marcus Macleod
(Book of Blood) as the ill fated soldiers. Victoria Morrison, Elanor Miller, Gillian Dryburgh,
Elizabeth Venezia are among the supporting cast, with multi-award winning actress Sarina
Taylor (Solitary) taking on one of the key supporting cast roles.
Brennan decided to make this his next movie after seeing the reception to Plan Z at the
Horrorhound festival; “I was so impressed by the love and support of the horror community at
that festival, I knew the next film had to be a horror. I have always wanted to combine mythology
with the Napoleonic Wars. This created these authentic characters suffering the toil of war, who
are pushed to their physical and mental limits in a mythical world. Shooting got pretty extreme.”
Filming took place at the Black Forest in Germany, as well as at a variety of locations across
Scotland. This is the third movie Brennan has produced in Scotland and he states: “I have a
great love of Scotland, the people, the locations, the cast and crew. There’s so much talent and
so little in terms of production. That needs to change and I’m proud to be helping. I have
another couple of features in development that could shoot here.”
The movie does not shy away from the battle scenes, nor the gore. Brennan who previously
managed a VFX studio in China said: “I prefer to combine physical and visual effects. That’s the
key to making things realistic and we certainly didn’t shy away from nudity, violence or gore in
this film. All based around a fast paced, gritty and compelling story of survival.”
“The Necromancer” is in post production in France & Scotland and will have a preview available
for buyers at the Cannes Film Festival later this year and is expected for release in March 2018.
Financing was provided by Qulum Music and Entertainment, Flamingo Post and Stronghold.
Brennan’s production company Stronghold have two other movies in post production at the
moment, including the highly anticipated ‘Tomorrow’ directed by Martha Pinson and Executive
Produced by Martin Scorsese and Emma Tillinger Koskoff. That film and ‘A Christmas Carol’ are
both expected to be released later this year and at Cannes their next slate will be announced.