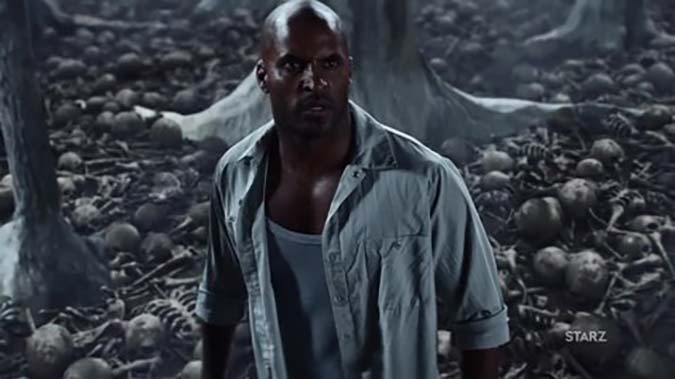 Starz’ has been getting a lot right with genre fans lately. It would be easy of course to begin this review with yet another love letter to Ash vs. Evil Dead so let’s just say “yay!” and move on. Ok? Good!

To say that American Gods differs in its tone from A vs. ED is an enormous understatement. Based on the novel of the same name from literary favorite Neil Gaiman, AG centers around Shadow Moon, a soon-to-be-released prisoner of the US penal system who wants nothing more than to see his wife again and restart his life with a clean slate. As we all, the easiest way to make God laugh is to make plans and Shadow learns that he is being released early to attend the funeral of his wife, killed in a car accident, alongside his best friend.

In a bid to get home in time to attend the services, Shadow takes an earlier flight where he meets up with Wednesday, an enigmatic man who seems to not only know way too much about Shadow’s personal life but also is way to eager to employ the now ex-con. As Shadow makes his way closer to the funeral he is plagued with disturbing dreams and visions, eventually making his way to a bar that coincidentally sees Wednesday buying him a drink and offering him employment once again. Shadow accepts and almost immediately the weirdness ratchets up to 11.

I have been a fan of Gaiman’s work for a while. He has a singular way of bridging impossible scenarios with very human characters and the result is always a fantastic culmination of the prolific writer’s gift for giving us brand new landscapes that still feel hauntingly familiar. American Gods is no exception to this and although we know that these are landscapes that dot and litter the atlases and roadmaps we’ve known for years we get the distinct impression that there are nots in the margin that tell us something far more mystical, deeper, and possibly sinister.

So, how does Starz translate Gaiman? Well, they have not been the first company to come along and see the value in his work. BBC made a miniseries out of Neverwhere, Coraline is practically a modern classic, and Stardust brought a still smoking hot Michelle Pfeiffer out of near retirement. What each of these productions managed was to show Gaiman’s quirk and whimsey. Gods set is sights on something considerably darker and the tone is heavy and thick from the very start. Now, I’m not saying that it totally abandons the ethereal quality that Gaiman’s other, more friendlier properties have, it just takes it and puts it in a universe that is far more dangerous. When blood spills in AG, it spills in volumes. It spills from vivisection, from decapitation, from evisceration and it burns a bright red against the soil. If genre fans can be assured of anything , it is that Starz is not pulling any punches when it comes to the adult representation of the bizarre and the bloody.

Starz also hasn’t held back on its casting, choosing the likes of Ian McShane, Gillan Anderson and others to round out a more than capable ensemble. In fact, just about every bit of AG’s casting feels inspired. McShane is perfect as Wednesday, the enigmatic, gypsy like figure that is reshaping Shadow’s life with every half-truth that spills from his lips. Shadow, in fact, is a very VERY interesting choice in that his demeanor, his dialect, his appearance and practically everything about him defies region, ethnicity, culture and is as mysterious as his name. With Anderson presumable joining the cast with tonight’s second episode it doesn’t look like the momentum is slowing down anytime soon. The second episode premieres tonight at 9PM on Starz. HIGHLY RECOMMENDED.