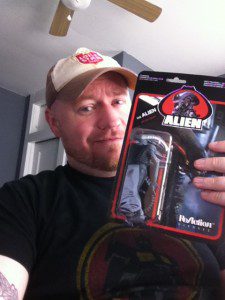 When ReAction Figures picked up the old molds to Kenner‘s Alien prototype figures the horror collectible crowd smiled an enormous shit-eat grinning. Ever since I had heard about a few of the Alien figures escaping Kenner’s offices and making their way into the hands of a private collector I was hoping beyond hope that someone would have the good sense to buy the molds and make fans happy.

Ya see, Sci-fi fans have have it too good for too long. Someone mentions the word “starship” and seemingly out of the ether an action figure line complete with vehicles, dioramas and life-size reproductions blinks its way into existence. Horror fans, on the other hand, have to typically wait till a film can prove itself over years in the home video market before licensing is even whispered in the corporate offices. SO, yes, ReAction Figures did the unthinkable by not only investing in an entire line of horror action figures (yes, Alien is definitely an established enough franchise to make the leap of faith), but they did so using molds that decidedly made the figures appear more than a little “retro” to modern toy collectors. With companies like Neca and McFarlane Toys producing fantastically detailed figures, ReAction figures harkened back to the days of 3 3/4″ Star Wars goodness, and ya know what? They frickin RAWK!!! The big question was whether any additional figures would follow up the Alien line as those were produced from source material that simply doesn’t come along that often. Well now that question was been answered. Do we like the answer? Yes, in fact, we very much do.

Starting in July multiple new lines of Reaction figures will become available including one that we are pretty excited about: The Horror Series 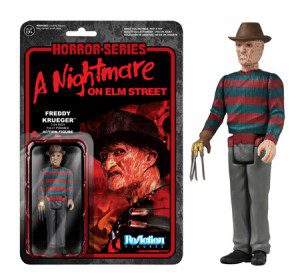 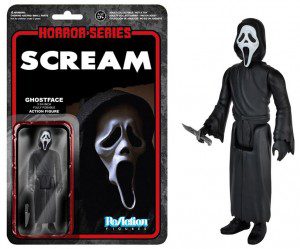 There are truly some great items coming our way from Super 7 and Funco including 3 3/4″ inch Goonies figures, Firefly figures and others, but THESE are truly tailor made for the horror collector. Lines start shipping as early as July. Pre-orders are being accepted right now on Entertainment Earth.