Scream Factory is gearing up for some huge releases this month. In addition to the hotly anticipated Friday the 13th Deluxe Edition, they are brining back some of their previously released titles in limited edition steelbooks. The steelbook editions contain upgraded audio and video along with new artwork exclusively for the particular title. One of the titles being released this Tuesday, October 13th is the sleazy horror comedy sensation Motel Hell. Scream Factory originally released Motel Hell in Blu-Ray format in 2014. Fans were critical of the transfer of the film and felt it was not up to par with the Scream Factory library. This year marks the 40th Anniversary of Motel Hell’s release so what better way for the company to redeem themselves by giving Motel Hell the best home release treatment it deserves.

If you’ve never seen Motel Hell before, I’ll give a brief synopsis. The film stars Rory Calhoun as Vincent Smith, a farmer who specializes in his own smoked meat products, but also runs the Motel Hello. With the help of his sister Ida (Nancy Parsons), Vincent sets traps up on the road for travelers to get into accidents and then kidnaps them and buries them alive as they are the secret ingredient for his meat products. One of the travelers, a young girl by the name of Terry (Nina Axelrod) survives her accident and spends time with Vincent and his family including younger brother Bruce (Paul Linke) who is the town sheriff. She becomes smitten with Vincent and agrees to marry him while Vincent hopes she can be trusted enough to pass on his secret recipe. The film was known as an homage to The Texas Chainsaw Massacre with its crude humor, brutal violence and a climax that ranks up in the best moments in horror history.

This version of Motel Hell includes a 4K transfer from the original negative along with a newly restored stereo audio track. It features all the Bonus Features from the original Blu-Ray release including the Audio Commentary track with director Kevin Connor, moderated by Dave Parker and several featurettes regarding the making of the film and one on one interviews with several of the cast members. Newly added to this release is the Official Teaser Trailer and TV Spots.

The fist thing you’ll notice right away is the new slick original artwork done exclusively for this release. I love the use of the yellowish/green color of the light hovering above Farmer Vincent in his pighead mask holding the chainsaw with a portrayal of things blowing in the wind from the chainsaw while Terry is screaming as she is strapped down helplessly. The steelbook is firm and doesn’t feel heavy. It’s another testament to Scream Factory for putting time, money and effort into making the best home releases possible for the fans.  There’s  28.5” X 16.5” rolled lithograph of the cover that is included with the order and still available at the time of this publication, so if you like this review make sure you order your copy as soon as possible before you have to reach down to the bogs of the internet and pay a hefty price just to get a poster.

The presentation of the film and the 4K transfer is a vast improvement from Scream Factory’s initial Blu- Ray release. There is a great balance of light and dark in the appropriate scenes in the movie. You never have to worry about not missing any detail in the night shots. The skin tone of the characters is natural along with the outdoor scenery. The neon sign of the hotel along with the opening credits are heightened by the colors that were used to give it a retro look. You can still see the grain in the film, but it didn’t bother me and kept that gritty look of the original release considering its dark humor and tone. When I reached the hypnotism scene in the movie, I was concerned that the white light and swirling colors would be too bright that it could blind me, but I was able to get through it without my eyes hurting.

While this version of Motel Hell includes a newly restored audio track, it is only in 2.0 stereo. There is no 5.1 surround mix which is disappointing considering most of the Scream Factory releases have this remastered audio available. Nevertheless, you can still hear the sickening groans and gurgles coming from the victims who can’t speak since their vocal chords are taken out and the rusty clash of metal coming from the epic chainsaw fight that dominates the climax of the movie. It doesn’t have the range or the surround to enhance the home theater experience.

As mentioned previously the Bonus Features of this steelbook edition include everything that was in the original Blu-Ray release of Motel Hell with the addition of the TV Spots and Teaser Trailer. The interviews run under a half hour in length but provide some great insight into the making of the movie including some battles with United Artist whom distributed the film to theaters. There’s even a nice retrospective on women in horror with Nancy Parsons’ portrayal as the portly eavesdropping sidekick sister Ida taking the lead. It’s nice to see Parsons get this lovely tribute considering she is indeed a great actress who could play diverse rolls in any film genre. Of course, nothing will top her performance as Ms. Ballbricker in the raunchy comedy classic Porky’s, but that’s for another day.

Overall the Motel Hell Limited Steelbook Edition is a good pickup if you’re a fan of the film or if you want to upgrade from the Blu-Ray edition. It’s priced at $28 which is around the average price for most of Scream/Shout Factory’s titles. I’m a little surprised that Scream Factory didn’t present this as a 40th Anniversary Edition like some of their upcoming box sets. Motel Hell is a great underground horror release and hopefully this edition does good enough in sales to keep its head above ground before it becomes another film fritter.

Summary
"The presentation of the film and the 4K transfer is a vast improvement from Scream Factory’s initial Blu- Ray release"
Good
Bad
7.8
Good 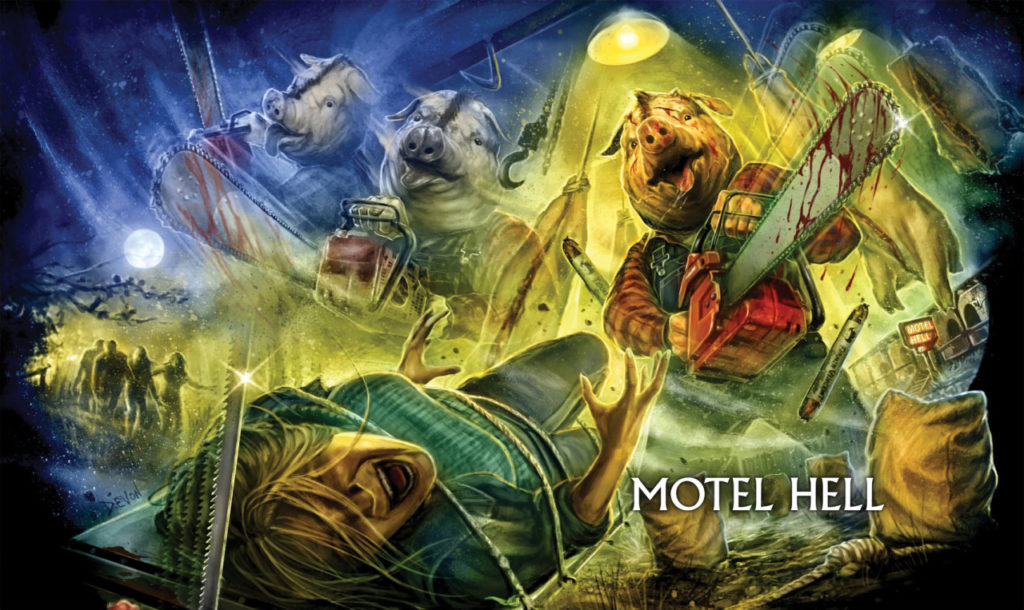 Scream Factory is gearing up for some huge releases this month. In addition to the hotly anticipated Friday the 13th Deluxe Edition, they are brining back some of their previously released titles in limited edition steelbooks. The stee...
0
Average User Rating
0 votes
Have Your Say!
Your Rating: 0
Submit
Write A Review
Rating:7.8