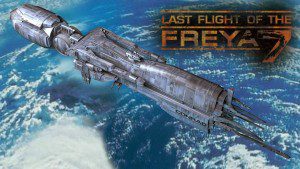 Sci-fi and horror always make a winning combination, as the makers of the upcoming web series Last Flight of Freya 7 explain:

Can you give us an overview of the project?

“Last Flight of the Freya 7” is the story of a ship and her crew, adrift in Lovecraft‘s uncaring universe, coming face to face with horrors both human and nonhuman. It is in many ways an homage to the movies (and movie-making techniques) we loved growing up, but it is also a chance to make something original. For this project our three biggest influences are The Shining, Alien, and John Carpenter’s The Thing.

What makes sci-fi and horror such a winning combination?

They both involve the unknown! There comes a point where Earthbound horrors have been played out and it starts to feel stale. Look at vampires for example: Lifeforce was such a fresh take on the concept that it really stands out even decades later. I even have a fondness for Hellraiser Bloodline and Jason X for branching out a bit when those franchises got stale. 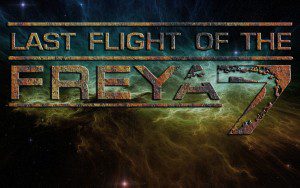 And I understand that Lovecraft is a particular influence?

Absolutely. You know much of Lovecraft’s best work straddles the line between science fiction and horror. At the Mountains of Madness and the Colour Out of Space in particular. Lovecraft co-wrote a short story called The Walls of Eryx that I wanted to adapt for years. It has a greedy mega-corporation striping a planet of it’s natural resources and arrogant soldiers for hire assuming the indigenous alien population is far more primitive than they turn out to be. But what works in a story (a giant invisible maze) would be a laughable mime-show on film. Plus James Cameron used a very similar plot line for Avatar.

Can we expect some cool sci-fi action and effects?

Yes, and Old School effects at that. We are limiting our CG as much as possible. We want to rely on in-camera techniques, practical effects and model work to really give it the right feel. It takes a hell of a lot of planning this way, but the end result is more authentic to the era.

Is it a challenge to work on a limited budget?

It is indeed. Even if we were filming a rom-com about two people who meet in a coffee shop there would be inherent costs, but when you add the sets, costumes, props, make up effects etc. that come with doing science fiction it becomes an even greater challenge. But challenges are good for stimulating creative thinking. We’ll never have a space battle like Star Wars or a chase through a busy street like Blade Runner, but by focusing on what we can achieve we can turn a limitation into an asset. Claustrophobia, paranoia, and tension all thrive in confined spaces, and that is the playground of the Freya 7 story.

What kind of creatures will be on display?

I’m going to keep that one under wraps a bit, but I have to say you will not be seeing any Gigeresque xenomorphs in this series. We are really looking to do something original and as a number of the later ALIEN sequels and spinoffs have proven, it is hard to top the original.

And what kind of spaceship is the Freya 7? Is it a character in itself?

The Freya 7 is an Interstellar Lading Shuttle owned and operated by Captain Ayla Harker. The ship’s been in the family, passed down from one generation of Harker’s to the next and with close to 60 years of service she is starting to show her age. She is absolutely a character in the sense that the ship is literally all that is keeping them from a quick and horrible death in the vacuum of space. The crew know her every creak and groan to be sure.

Can you talk about the cast?

I am very excited by the group of actors we’ve assembled for the series. Some are folks we’ve worked with before (we’ve been making short films for over a decade), and some are folks we’ve been trying to get for a while now. Two of our leads in the series (Kenya Hall and Samuel James) are better known as musicians, but they are both just powerhouses. A few of our other actors (Will Stewart, Michael Best and Rick Dalton) came out of Portland’s amazing underground theater scene. These folks were mounting productions that made me think of Stuart Gordon‘s Screw Theater. Their plays are how my wife and I met actually, doing practical effects for live theater, so bringing these guys in is a real honor.

As this is a series how long do you expect it to last? Are you planning a second season?

After the Damnationland theatrical version we hope to produce a six episode web-based miniseries. I’m a huge fan of the way British TV operates in that regard, so we’ll be following that model. There will be the possibility of a second season for sure, but not in a conventional manner. To quote one of my favorite movie taglines “who will survive, and what will be left of them?”