Bliss on Tap Comics Bring us Zombies, Aliens and More! The Horror!

Those that know me know that I spend a LOT of time looking for new horror comics to read. Seeing GlobalComix partner up with Bliss on Tap definitely made my work easier for me this week! As an added bonus, 5 readers will get a discount code!!!

In the comics world, you’re bound to find some gems. Diamonds in the rough. And sometimes you find euphoria. You find your bliss. That’s how we feel knowing Bliss on Tap is now on GlobalComix. We’re thrilled to partner with Brian Philipson and his team of extraordinarily talented creators to bring you the full Bliss on Tap catalog here on GlobalComix.

Brian shared: “Bliss on Tap comics cater to a carefully curated crowd of weary rock stars, old poets, graffiti artists, out-of-style influencers, soon-to-be zombies, stoners, loners, lost time-travelers, extraterrestrial outcasts and those discerning readers who don’t always find what they’re looking for in the mainstream.  We’re excited to work with Global Comix and its awesome team to bring our unique voices and independent library of comics & graphic novels to its worldwide audience (which word on the street says is some of the best in the comic business).”

From Future Proof to Weed Magic, God The Dyslexic Dog to Train 8, you are bound to find a story in their catalog that suits your fancy. That is, if you enjoy comics that are excellently composed, a bit twisted, and don’t take themselves too seriously.

“One of my favorite things about being a part of GlobalComix is learning about the amazing indie stories from folks I might not have had on my radar, and Bliss on Tap is a great example of that,” said GlobalComix’s own Chris Carter. “I’m thrilled to have gotten to know Brian and his work and I’m looking forward to new folks sharing in the privilege of reading his work.”

You can read Bliss on Tap now, along with 5,000+ other comics for $1.99 for your first month! Find out more about our current discount promotion on unlimited reading at https://globalcomix.com/gold.

About Bliss on Tap: With the idea of creating a new kind of comic for the 21st century, Bliss on Tap started in 2004 in Los Angeles when the father and son team, Phil Phillipson & Brian Phillipson, were joined by artist and Eisner Award Hall of Fame Nominee Alex Nino in creating the graphic novel series, God the Dyslexic Dog.  This hit title literally launched their independent comic book company and they have been churning out comic books ever since.  With over a dozen homegrown distinctive series now in print, BOT has also worked with a variety of movie studios to create comic adaptations of feature films such as Hardcore Henry, Uglydolls, The Happytime Murders and Valerian.  Bliss on Tap has also somehow found itself featured in such highbrow mainstream publications as High Times, The New York Times, Forbes Magazine and The Wall Street Journal.

Future Proof is an on-going, bi-monthly series which follows two outcast agents who are recruited into a systematic one-way journey back through time where ultimately their actions allow for the most monumental events in history to take place. Issue #1 jumps right into the action as the two agents get caught up in the middle of one of the greatest conspiracies of all time — the Kennedy… 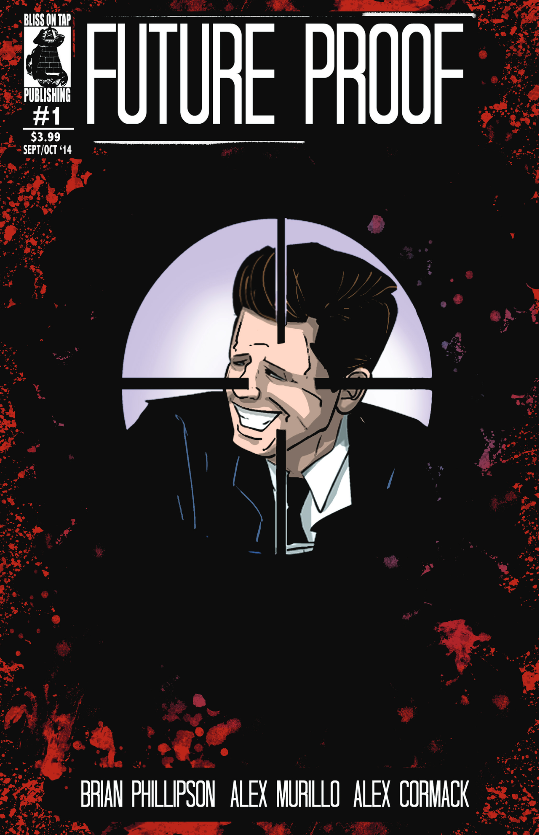 Ash Hamilton is not only the owner of Horror-Fix.com, but also one of its major contributors. A long time horror movie enthusiast, Ash has lent his personality to radio and television and continues to support his favorite genre through his writing and art. He also loves beef jerky and puppies... and low-grade street-quality hallucinogens.
You might also like
Comics NewsExclusivesFeaturedNews

by horrorfix on 11/24/2022
Hart Fisher launches the Big Book of Dahmer Indiegogo campaign to bring back the his Legendary Jeffrey Dahmer comics. https://www.indiegogo.com/projects/hart-d-fisher-s-big-book-of-dahmer/coming_soon? Hart D. Fisher is the world famous author of the [...]

by horrorfix on 10/11/2021
Cult of Dracula Key Issues Generating Heat at NYCC! You folks have been with us from the beginning. We want to give you a heads up so you can stay ahead of the market on Cult of Dracula! Here’s the scoop! Cult of Draculaand writer/creator Rich Davis [...]

by horrorfix on 08/29/2021
Horror legend, Hart D. Fisher’s Bill The Bull Kickstarter launches Sunday August 29th, follow our preview page for news and a shot at extra reward opportunities! We’ve got one helluva reward for (hint hint, you can wear it) everyone backing [...]
Comments
Leave a reply