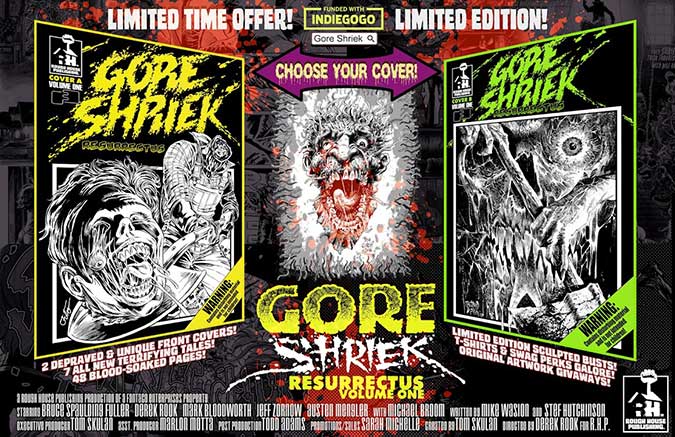 On the independent comic book scene, The Tick was burrowing its way under the skin of the public consciousness; anything with an ‘adjective, adjective, adjective, animal’ title was flooding the market in the wake of The Turtles’ success. Elsewhere, The Dark Knight was Returning, The Swamp Thing was Alan Moore’ing, and in a small comic book shop out in Albany, New York, Owner/Editor/Publisher, Tom Skulan was gearing up to deliver a blunt force visual assault with the debut horror anthology comic, GORE SHRIEK! The book ran only 13 issues in total over a seven year period, but the mark it left on indie comics was LEGENDARY. GORE SHRIEK spawned the careers of Bruce Spaulding Fuller, Greg Capullo, Gurchian Singh, and with heavy contributions from Stephen R. Bissette and the late, great Chas. Balun.

Then the 90’s came, and GORE SHRIEK disappeared from the public eye …forever! And that my friends, is the biggest LIE ever told!

“I will never get over the amount of fan mail I’ve received over the years consistently asking when I was bringing back GORE SHRIEK. Out of all the titles I’ve published over the years, GORE SHRIEK has been the one that EVERYONE wants back on the stands.” said Skulan of the titular title.

Of those fans that cried out for gory justice, no one waved the flag higher than indie publishing sensations, Derek Rook and Mike Wasion from ROUGH HOUSE PUBLISHING. Last year, the team released the critically infamous THE DEAD – OMNIBUS, with series and DEADWORLD creators, Ralph Griffith and Stuart Kerr to great success. Itching to make their sophomore effort something really special, Rook and Wasion proposed to Tom a “Resurrection” of GORE SHRIEK in grand form.

Hence GORE SHRIEK RESURRECTUS was born! And just in time for the titles 30th anniversary!

After a year of prep, GORE SHRIEK – RESURRECTUS is ready to dig itself out of the cold, dead earth to remind comic book readers what it’s like to love indie comic books again. Rook and Wasion, who also contributed to the artistic and narrative duties, respectfully, scoured the earth to find the best SHRIEK appropriate artists on the planet to round out the mix. (see story descriptions below). “These guys have their fingers on the pulse, man. We wanted the fans old and new to experience the exact same look, feel, texture and smell of the original series and they delivered. “ Skulan bellowed .

GORE SHRIEK – RESURRECTUS is a 48-page, cover to cover, artistic splatterama and will feature two front covers for collectors to choose from. Cover A will feature the 2D return of Bruce Spaulding Fuller and Cover B will feature the amazing art of Putrid Matt Carr. An additional, ultra-rare, “prestige” format volume of Cover A will also be made available with a gorgeous 10-pt, square-bound format and premium paper stock to round out the volumes. This is the real deal, kids. Every effort was made to make this the perfect continuation of your GORE SHRIEK collection. Fans WILL NOT be disappointed! Here’s a short-list of the stories you have to look forward to:

GATEWAY TO GORE – After 20 years of silence, this GORE SHRIEK opener will beg the question; are we ascending out of hell or digging a hole deeper into it …and which choice is worse? A surrealistic nightmare brought to you by MIKE WASION with artwork by Aussie artist sensation, AUSTEN MENGLER!

HOSPICE – A small group of islanders led by a missionary leader scramble to rebuild their village in the wake of a massive category 5 hurricane. Many died… But why won’t they stay that way? Voodoo lore- galore brought to you by The Dead – Omnibus team of MIKE WASION and DEREK ROOK!

THE SINK – Get out the Liquid Plumber because, by GAHD! Some of those stubborn clogs have a way of letting you know it! Every tradesman’s nightmare written by (you guessed it, Mr. WASION) and joined by Deadworld artist, MARK BLOODWORTH!

A DREADTIME STORY – Keep the flashlight by the bedside table for this little tale that makes the Grimm’s feel like Disney! Brought to you by the ORIGINAL GORE SHRIEK artist, …the one, the only BRUCE SPAULDING FULLER, coming back to draw his first comic book story in over 20 years, just for you!

THE GROVE OF COTTONMOUTH – Two hunting buddies go deep into the forest in search for the big game. But who’s the predators and who are the prey? A story brought to by DEREK ROOK with special guest artist, MICHAEL BROOM, working together for the first time since Lucio Fulci’s Zombie back in 2000.

ZOMBIE HARDWARE STORE – Yes, you heard that title right! This is the official sequel to the original “Zombie Toolshed” that appeared way back in GORE SHRIEK #1! And if you thought the first one brought on the entrails, just wait ‘til you see the pick-up on isle 5. WASION picks up the writing duties with fan favorite splatterpunk artist, PUTRID MATT CARR!

Tom Skulan is the father of one of the Cosby decades most notorious comic book IP’s and ROUGH HOUSE PUBLISHING is bringing it right back to your front door. Skulan concludes, “We had such a giant response to our original crowd-funding campaign that we needed to start TWO more just to get everybody. We wanted to make sure no one was left out for the new GORE SHRIEK!”

GORE SHRIEK – RESURRECTUS VOLUME ONE will be made available through their Indiegogo campaign with tons of perks to make the trip worth taking. Fiends will be able to purchase T-Shirts, stickers, original panels from the book, original sketches, scripts and an amazing bust, sculpted and painted by FX extraordinaire, Jared Balog.

GORE SHRIEK RESURRECTUS VOLUME ONE ships at the end of June 2016, with a VOLUME TWO to follow in OCTOBER, just in time from HALLOWEEN! Follow the links and pre-order yours while they last!

The fans have spoken ….It’s time to SHRIEK AND SHRIEK AGAIN!!!