It’s always interesting to watch the evolution of a horror franchise. We get to see the growth of characters, of mythologies, and even the creators involved. The latter is of particular interest to VOB: Horror Stories because anthologies function on a much different principle than sequels that continue a single narrative. With that in mind, I walked into VOB2 with a fair level of excitement. The first film, a micro-budget indie outta Owensboro, KY, was extremely ambitious for its dollar and I found myself not just enjoying it, but wanting to get behind the film, to encourage the filmmakers to show us more. Hell, we even hosted a screening of the first film and one thing was apparent as I sat with the audience: VOB didn’t feel like a film constrained by its budget, instead it felt like a film inspired in its writing.

Let me start off by saying that Volumes of Blood: Horror Story is a far technically superior film to its predecessor. The movie just looks good. From the cinematography to the equipment used, the second offering shows a maturity in its use of the industry tools that immediately elevates it from similar films in its price range. There is attention to direction here and it shows. This is not a film lensed out of necessity, but out of purpose. Low budget horror is wrought with amateur filmmakers that want to tell their stories but often forget how effective style can be and that regardless of the words on the page, if they don’t know their equipment or can’t understand the benefit of good storyboarding their story will get mired in their technical shortcomings. VOB2’s creators, including second-time contributor P.J. Starks, seem very aware of this, and it shows.

Technical achievements aside, Horror Stories is just what it sets out to be, a proper anthology that tells stories. Stories is the drive here and VOB manages to give us an anthology of stories that reads like a best of list of urban legends. THIS is really the crux of just how good VOB2 plays its cards and the winks and nods that we get along the way are testament to just how much fun the cast and crew had, all the while being cognizant of their unique ability to parody their own subject matter. It serves up a degree of intelligence that is also missing from a lot of indie horror, an intelligence that often steps out in lieu of florescent red blood and sub-par acting. Don’t let the prior statement confuse you, VOB2 is GORY. It is filled to the brim with literal “volumes” of the red stuff that proves another promise the film set out to make good on.

The stories compliment the bloodletting well, each one telling of an atrocity that happens in the house that the audience, and an unlucky pair of future homeowners, are bing guided through, room by room. I have to say again, that each of these tales could very well be inserted directly into a late-night campfire session, a flashlight dramatized slumber party tell-all,  or a dinner party dessert yarn and each would seem to hold their own amongst the urban legends we have all committed to memory to recite in any one of the aforementioned scenarios: a down-on-his-luck insurance salesman (Caleb Shore) gets more than he bargained for at a house that will threaten his own mortality in “Feeding Time”, directed by John Holt, a mother raging from Black Friday disappointment (Julie Streble) picks the wrong day to confront her usurper (Jessica Schroeder) in “Fear, For Sinners Here” directed by Nathan Milliner, the perfect neighbors have their own skeletons in their closet when friends come to visit in “DeathDay Party” directed by Justin Seaman. These and the other parables offered to us here are stories that nestle themselves right in besides the hooked-handed murderers of Lovers Lane and the back-seat escaped mental patients of long rural drives. In essence, these are volumes that compliment the lexicon of horror stories that have become the staples of our “dark and stormy night” narratives. 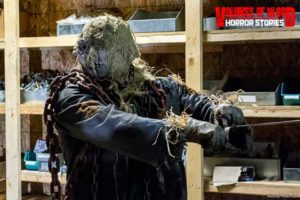 With as much lip service as I’ve given it, the film is not without its flaws. Some of VOB2’s actors are still cutting their teeth and while a room full of drama class hopefuls might have camouflaged their efforts, there is enough acting talent throughout the film that the rough edges tend to become a little more noticeable this time around. Acting has long plagued indie horror films and it comes with the territory. In this instance it is not enough of an offense to warrant having to be forgiven. If anything, its such a small distraction that it lets us fully realize just how little distance a film like Volumes of Blood: Horror Stories has to go to not just compete with the big boys, but to show them a thing or two. HIGHLY RECOMMENDED.

0 0
Previous ArticleTrump Wins and the Deep Ones return…Coincidence?Next Article5 Ways Horror on TV is Putting Feature Films to Shame