Joe Begos loves horror films. No, really, he does. Watching his directorial effort Almost Human will cement that fact for you. At times it might even force feed it to you until you projectile vomit 80’s horror all over your living room, BUT, and this is what we might ask ourselves, “is that such a bad thing?” I can say unequivocally, that it is most certainly not. 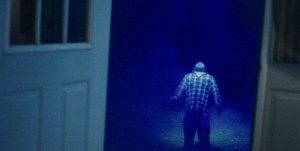 Almost Human opens with our lead Seth (Graham Skipper) on a frantic late night drive to his friend Mark’s (Josh Ethier) after their mutual friend has seemingly been abducted in flash of brilliant blue-light all Travis Walton style. Upon relating his story, a dubious Mark decides its time to look for their friend, be before he can their friend’s abductor finds them, leaving Seth and Mark’s girlfriend in the wake, explaining not one but now two disappearances.

The movie fast-forwards to two years after Mark’s disappearance and Seth is still suffering from enigmatic dreams and health problems. Seth’s recent dreams however are leading him to believe that something sinister is around the corner and he visits Mark’s old girlfriend with a warning that danger lurks on the horizon. Seth’s premonition is of course one of substance as we see two unwitting hunters stumble upon a naked man in the forest, one that promptly kills them and starts a murderous rampage all while wearing the face of one long-lost Mark, who is now, as we see, only Almost Human.

Begos himself has described Almost Human as Fire in the Sky meets The Terminator. Throw The Thing and Invasion of the Body Snatchers into the mix and there is one thought that is both prominent and well welcomed here: Joe Begos GETS IT. He gets the genre. He understands what to show and when to show it, keeping cheaper practical effects just out of the full stare of the camera while wholly showcasing those effects that work. He also understands that there are times where you don’t need bloated, wordy exposition or ”shock me, shock me” scenes of unnecessary torture porn.  There has been a lot of love for Almost Human that has been rightly deserved. 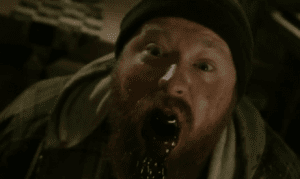 Almost Human boasts a quickly likeable cast in both Seth, the troubled, tortured friend left behind, and Jen (Vanessa Leigh), Mark’s ex-girlfriend who is just trying to put her life together and move on after even that not only took the man she loved, but did so in such a fashion that she’s still left second guessing the night it all happened. Leigh gives a solid enough performance but it is really Graham Skipper who shines here leaving use wondering just why the hell we haven’t seen this guy before. He’s not an ex-marine who uses his brawny military savvy machismo to take down the alien threat. He is an every man who goes into a terrifying situation the way most of us would, wide-eyed with our pants full of “oh shit!” This is made more the believable with Josh Ethier’s subtle and disturbing take on the alien masquerading as human, Mark, a role that could have easily been overdone and well worn before its introduction, as we have seen in similar films.

While there area lot of things that Almost Human IS; a loving tribute to 80s creature features and splatter. There are a lot of things that Almost Human ISN’T; a quick cash grab filled with vapid teens who only serve as victims, minus actual CHARACTER or a film that stands on the shadows of its predecessors while shitting down the back of their shirts. Almost Human plays homage lovingly when it can, but doesn’t count on its inspiration to endear itself to the viewer, it does that with a story that effortlessly propels itself forward all the while giving its audience what we all came here to see in the first place… a good horror film. HIGHLY RECOMMENDED.

Almost Human is currently available on VOD and in select theaters.