Set to star in DON’T LOOK IN THE BASEMENT Remake: DEATH WARD 13

Legendary Misfits Guitarist Doyle Wolfgang Von Frankenstein is set to star in DEATH WARD 13, a remake of the cult-classic film DON’T LOOK IN THE BASEMENT. With his iconic Devilock hair and impressive physical build, “Doyle” is best known as the guitar player for the American horror punk band the MISFITS and will play the most terrifying character in the film. Now in pre-production, DEATH WARD 13 is directed by award-winning horror filmmaker Todd Nunes (ALL THROUGH THE HOUSE) and produced by The Readmond Company.

”I’m looking forward to starting my movie career with a starring role in “Death Ward 13,” says Doyle. “It’s time to release the beast on the big screen. Let the killing begin!”

“With Doyle’s horror punk background, we’ve always been looking for opportunities to have him cross over into film, but nothing has sparked his interest until now”, says Bruce Miyaki (Insane Management.) “Death Ward 13 is a great breakout film for Doyle – his fans are going to love it.”

Although he is known for playing guitar with the horror punk band the Misfits, which helped create the horror punk genre, Doyle also has a solo project rightfully named DOYLE. In 2013 Doyle released the Abominator album with Monsterman Records, and he is currently on tour in the USA supporting his new CD As We Die in stores May 5, 2017 through the Monsterman Records/EMP Label Group.

DEATH WARD 13 is Doyle’s first starring role in a film; he is currently in talks with the film’s producers and Monsterman co-founder Bruce Miyaki to provide music tracks for the soundtrack.

“I’m excited to work with Doyle,” says director Todd Nunes. “Doyle will be portraying a ruthless killer called The Duke – a psychopath and the most twisted and terrifying character in the movie. I’m a big fan of Doyle and his music and always thought he would make a menacing horror movie villain. With his threatening looks and massive build, this man will scare the crap out of everyone. Get ready for a horrifying ride!”

DEATH WARD 13 is Todd Nunes’ bloody love letter to DON’T LOOK IN THE BASEMENT. This reimagined version will give fans a taste of the original film with added practical effects and bloody gore for modern horror fanatics. DEATH WARD 13 will also feature more nurses, freaks, and blood as well as a brutal climax with an updated, disturbing twist.

SYNOPSIS: It’s 1973 and the Stephens Sanitarium for the Criminally Insane prepares to shut down permanently. Days before closing, four beautiful nursing students arrive to care for the last handful of “harmless” mental patients in a suspiciously understaffed ward. Confronted by their violent charges, the nurses soon realize that they are trapped inside the asylum with a deadly crew of vicious lunatics. Each patient has their own perverse identity, their own personal demons, and their own violent agenda. Pushed to the brink of insanity, the young nurses find themselves in a gruesome fight for survival inside Ward 13.

ABOUT DOYLE: Lodi, a small borough of Bergen County, New Jersey, is just over two square miles. There’s not much to suggest that the small village would be the birthplace of a world famous, blood-soaked form of music known as horror punk. Legendary acts The Misfits, Samhain, and Danzig all have their origins in Lodi, and something monstrous indeed lurks there. The poster child and originator of the genre, himself, has once again unleashed an evil noise on an unsuspecting world: Doyle Wolfgang Von Frankenstein’s first release, Abominator, by his eponymous band, Doyle.

Released on Doyle’s own label, Monsterman Records, Abominator is a sonically thick and lyrically evil slab of metal that finds Doyle expanding in a logical progression upon the genre of music he helped create. Doyle’s first band, the infamous Glenn Danzig-fronted Misfits, helped create the genre of speed/thrash metal with their last album, 1983’s Earth AD/Wolf’s Blood- in fact the record has been revered as one of the blueprints for the genre by many of its most respected players, as evidenced by countless groups covering the album’s songs, not the least of which being Metallica. Abominator is not the sound of some punk guitarist gone metal- it’s the roaring return of one of extreme metal’s original architects to his blood-splattered drawing board. 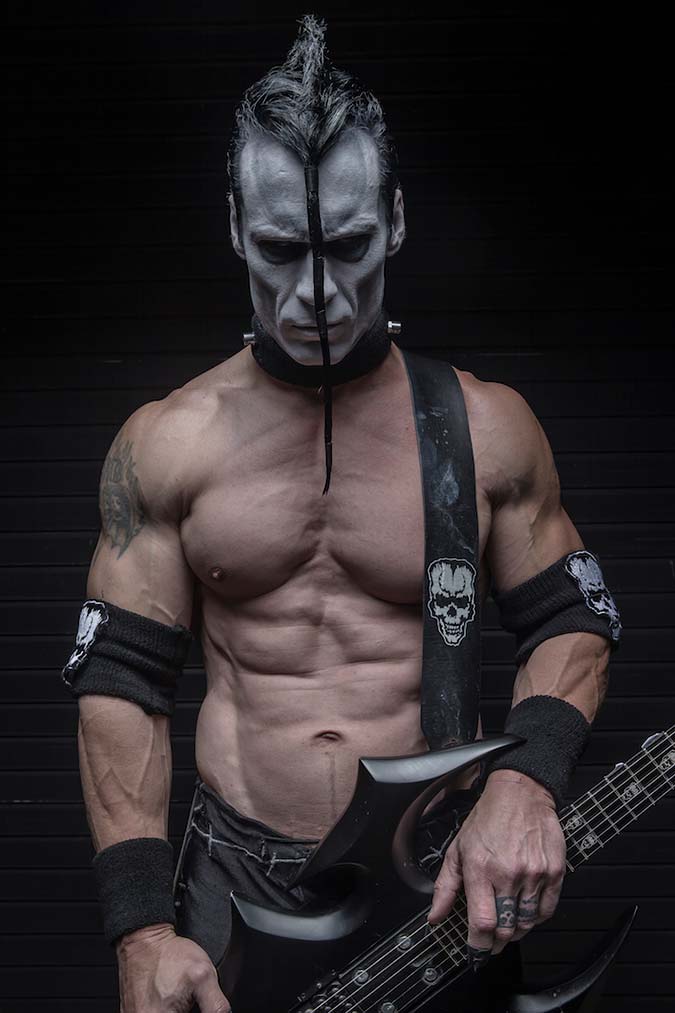 0 0
Previous ArticleMeet Horror Icon HEATHER LANGENKAMP at the Women in Horror Film Festival!Next ArticleMass Effect is the best game ever