Brain Damage Films has just turned on the Ghostlight, a creepy ghost story sure to haunt viewers across North America.  The DVD is available at retailers including MovieStop, online including Amazon, or for rental at most Family Video locations.  Bonus features include a 75min Making-Of documentary, audio commentary, and Jeff Ferrell’s acclaimed short film Morella.  Ghostlight will also be available on all major VOD platforms starting early July.

About the Film
Ghostlight is director Jeff Ferrell’s debut feature, wearing the hats of writer/producer/director/editor/actor, though he’s no stranger to horror — His 2012 short film Morella garnered worldwide acclaim from an extensive festival run.  Ghostlight is a terrifying horror film that puts a unique twist on that most timeless and beloved form of terror tale: the ghost story.

Fans of Hitchcock will appreciate that the film leaves much to the imagination while remaining creepy enough to raise the hair on the back of your neck.

Synopsis
Andrew (Brian Sutherland) wins a radio contest to spend one night alone in a haunted theater on the 80th anniversary of the bloody murder/suicide that occurred within its walls. His prize: $50,000. His task: To spend 12 hours alone inside. The catch: The theater has been reportedly haunted ever since the tragedy 80 years ago, and has been plagued by a series of mysterious deaths in the years since. A devout disbeliever in the supernatural, Andrew has no qualms about spending the night there. But his wife Mira (Lisa Coronado), who has been haunted by psychic premonitions about the place, feels differently. As Andrew is locked inside the theater for the night, the ghosts and secrets of its past begin to reveal themselves to him. Will he make it through the night to collect his prize? And will he get out before the murderous ghosts take hold of him forever? 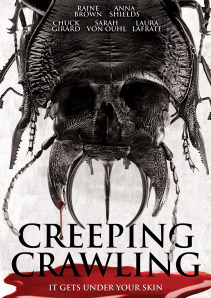