Disclaimer: This review is based on the initial set that was shipped out. Scream Factory has released a statement regarding issues with certain movies that fans have noticed:

“Unfortunately, there were some unintended mistakes in our process due to human error, for which we accept responsibility, and we extend to you our genuine apologies. We plan to correct those errors by offering replacements for three discs: Friday the 13th Part 3, Jason Goes to Hell (Uncut version) and Jason X.”

See the link after the end of the review as to how to order your replacement discs.

This year marks the 40th anniversary of the release of Friday the 13th, a film which lead the charge for slasher movies in the 80s and gave birth to a franchise that is influential to this date. The film would create a new antagonist in Jason Voorhees, a hockey mask wielding superhuman who became part of a new generation of monster movie icons alongside Michael Myers, Freddy Krueger and Leatherface. The Friday the 13th series spawned twelve movies including a remake, a spin off where Jason goes toe to toe with the nightmarish Freddy, a TV series (in name only), documentaries, fan films and all kinds of pop culture references. It’s exactly what Sean S. Cunningham had envisioned when he created the first film. He wanted to create a franchise that would be profitable and live on through the decades.

To celebrate this milestone, Scream Factory has come out with the biggest collection of the film series to the consumer. The Friday the 13th Collection (Deluxe Edition) features all twelve films in the franchise spanned across sixteen discs (the 2009 remake and Freddy Vs. Jason are included). Each disc includes the feature film, Audio Commentaries and Bonus Features new and old to give the audience the full experience of watching the Friday the 13th series. The biggest features of this set are the first four entries in the series have a new 4K transfer taken from the original negative with the first Friday the 13th film getting the treatment for both the Theatrical and Uncut Versions, a new 3-D transfer of Friday the 13th Part 3, a new 2K transfer of Jason Goes To Hell: The Final Friday, which includes the Theatrical Version and the Unrated Version, which has been released for the very first time exclusively for the Deluxe Edition and two bonus discs featuring a ton of extras including interviews, location revisits, still photos, EPKs, and trailers (Horror-Fix.com’s own Jim Chandler provided the trailers for the Friday films 1-3 and 6-8 along with the TV Spots for 1 and 2 and the Radio Spots for 1-4). All are housed in a box containing new original artwork and includes a sixty-page booklet chronicling the history of the series.

The first thing you’ll notice after opening the packaging that the Deluxe Set comes in is the artwork which covers 3/4th of the box. The amazing artwork done by Scream Factory celebrates the hockey masked murderer in all of his incarnations throughout the series. If you have a favorite version of Jason, he is displayed. The top of the box features the iconic hockey mask and the back is where you can see each movie stored in order and in its own Blu-Ray case. I was amazed how light the Deluxe Set felt when picking it up from the space in the package that it was cradled in. It was durable and made me feel that I indeed had the Holy Grail of Friday the 13th sets that have been released throughout the years in numerous video formats. After taking off the shrink wrap, I tilted the Deluxe Edition box to get each case to slide out. From there I began to watch each film in order along with the extras and write down my impressions at the end so that would help guide me in this review.

The highlights of the Deluxe Edition are indeed the new 4K transfers of Friday the 13th Parts 1 through 4. Like many 4K transfers I’ve seen, these versions bring out the film’s natural lighting and colors to the settings and scenes. I was in awe over the vibrant l landscapes and scenery shown throughout each movie. What impressed me the most with the new transfer is during the dark rainy scenes of Part 4: The Final Chapter, you can see the characters along with their expressions. The dark doesn’t consume the entire scene, so you don’t have to worry about trying to make out what is going on in the scene. The transfers of the films also bring out not only the rustic interior shots of the cabins and lodges in each movie, but also the special effects. The blood color is a natural looking red and the tools and weaponry that Jason use gives an authentic look even though they are dummy weapons. Add the 5.1 surround sound mix filled with Harry Manfredini’s score filled with pulsing tension and the noises of every bone crushing, machete swinging and glass shattering will make you clench your teeth in suspense. It’s the best home viewing experience of the series that is available.

Unfortunately, I do not have a 3D television so I’m unable to give my impressions on the new 3-D transfer of Part 3. However, reading reviews from other critics and fans, it sounds like the 3-D transfer is sharp and enhanced to give the watcher the experience of being right in the movie. Reviewers mentioning ducking down in their seats when a pole or baseball project onto the glasses and jumping during the infamous eye-popping scene. If you’re lucky to have a 3-D television and glasses (3-D glasses are not included in the Deluxe Edition), then you’re in for a real treat with Part 3.

The rest of the films in the series with the exception of Jason Goes To Hell are released in standard 1080p format. Despite not getting the 2K or 4K treatment, each film looks great on screen. You don’t have to worry about the picture looking grainy or smoky. I noticed a few things in my personal favorite, Friday the 13th Part VIII: Jason Takes Manhattan that I’ve never seen before in previous viewings.  Each film offers the 5.1 surround sound mix for your audio listening pleasure. Each film includes the Bonus Features that have carried over through previous releases, but there are a few new additions exclusively for this release. Part VI: Jason Lives includes a new audio commentary track with actors C.J. Graham, Thom Matthews, Vincent Guastaferro, Kerry Noonan and Cynthia Kania and Jason X features new interviews with Sean S. Cunningham and his son Noel along with Kane Hodder and Kristi Angus. If you’re a fan of either film, it’s nice to hear a new fresh retrospective on these movies.

As for Jason Goes To Hell, this title was considered the most anticipated release for the set due to the fact that there would be an Unrated Version which has never been released until now in addition to the Theatrical Version. Both versions of the film look solid with the new 2K transfer from the original film negative and include an introduction from director Adam Marcus along with two new commentary tracks from Marcus and author Peter Bracke and the man who played Jason through four films, Kane Hodder. The 2K transfers are solid and I loved the sound mix of the film. The hypnotizing heartbeat blared through my surround speakers giving a sickly thud. The commentary tracks give insight on the approach and direction Marcus took for telling this offbeat story and going more into the demonic spiritual lore of Jason. The biggest disappointment of this title is the Unrated Version itself. I had high expectations thinking that the Unrated Version would add a few new scenes and the rumored alternate ending being presented for the first time. Sadly, that wasn’t the case. Three minutes are added to the Unrated Version and they quickly come and go in the blink of an eye. You can tell what scenes have been inserted as they were taken from the original film stock, but they don’t do much to enhance the story or plot. I still enjoy Jason Goes To Hell as I’ve considered it in my list of the Top 25 Guiltiest Pleasure Horror Movies and I’m not going to let the underwhelming Unrated Version deteriorate my viewing experience for future screenings.

The final two discs of the collection contain a whole bunch of extras including interviews, location returns and other miscellaneous content. I think Scream Factory overdid it on the interviews because there are several featuring Sean S. Cunningham and two featuring Tom McLoughlin, director of Part VI. It gets tedious to hear Cunningham repeatedly talk about the same concepts through several different interviews. One of the Location Featurettes was done by a team that runs the Crystal Lake Tours for fans. The presentation was poor with the public access looking credits and the monotonal voiceover of one of the narrators not to mention there’s not a frame by frame shot of a before and after picture of what is being shown. They could’ve shot a road from anywhere in the country and claim that it is the road where Annie is dropped off in the first Friday the 13th film. Luckily, there’s another Location Features that is vastly improved with a near perfect frame by frame look and no annoying voiceovers. My favorite content on the Special Features discs was Alice Cooper’s music video for the song “He’s Back (The Man Behind The Mask) from Part VI along with an interview with Cooper about writing the song and creating the music video. It never occurred to me until the end of the interview that his video was the first music video for a horror film. Great trivia to share with your friends. The Special Features discs includes Q&A panels from conventions, still galleries and electronic press kits from the 2009 remake and a flip through of the Friday the 13Th card set which will make you start looking on Amazon or eBay to pick up a deck of your own. I do wish they included the numerous documentaries including Crystal Lake Memories, His Name Was Jason and The Return To Camp Crystal Lake, which were omitted in this collection.

Once again, Scream Factory has released an incredible box set of one of the best horror franchises in film history. The Friday the 13th Collection (Deluxe Edition) is the definitive box set with each movie presented in the highest resolution and sound available. With twelve movies and a treasure trove of extra features and content, Friday the 13th will consume your horror movie viewing this Halloween season, or you can hold off watching them until the real Friday the 13th, which is one month away in November. 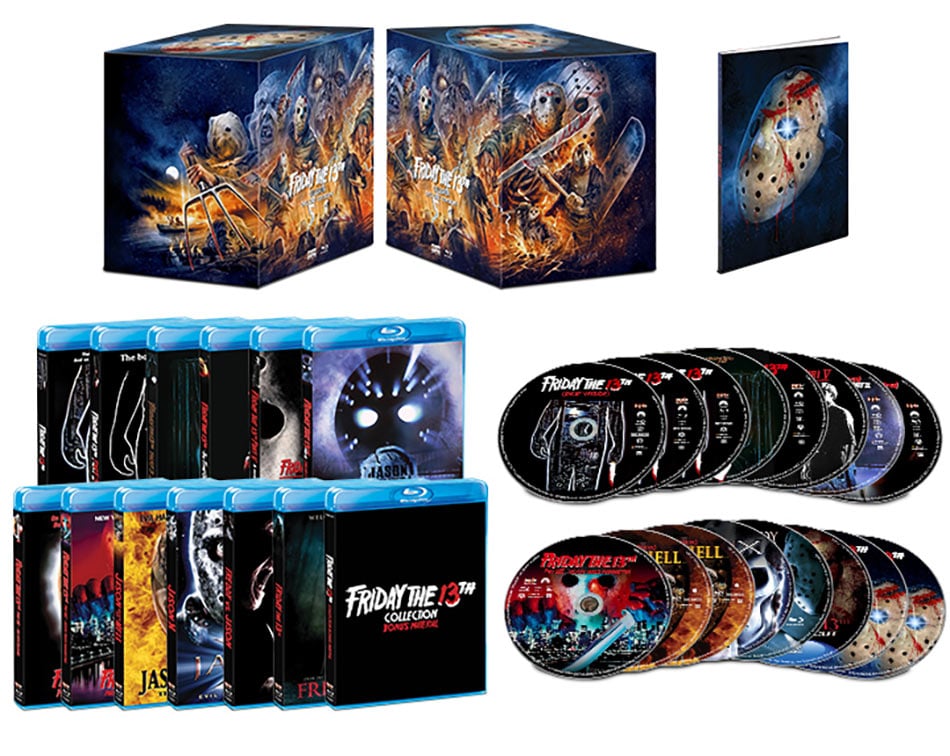 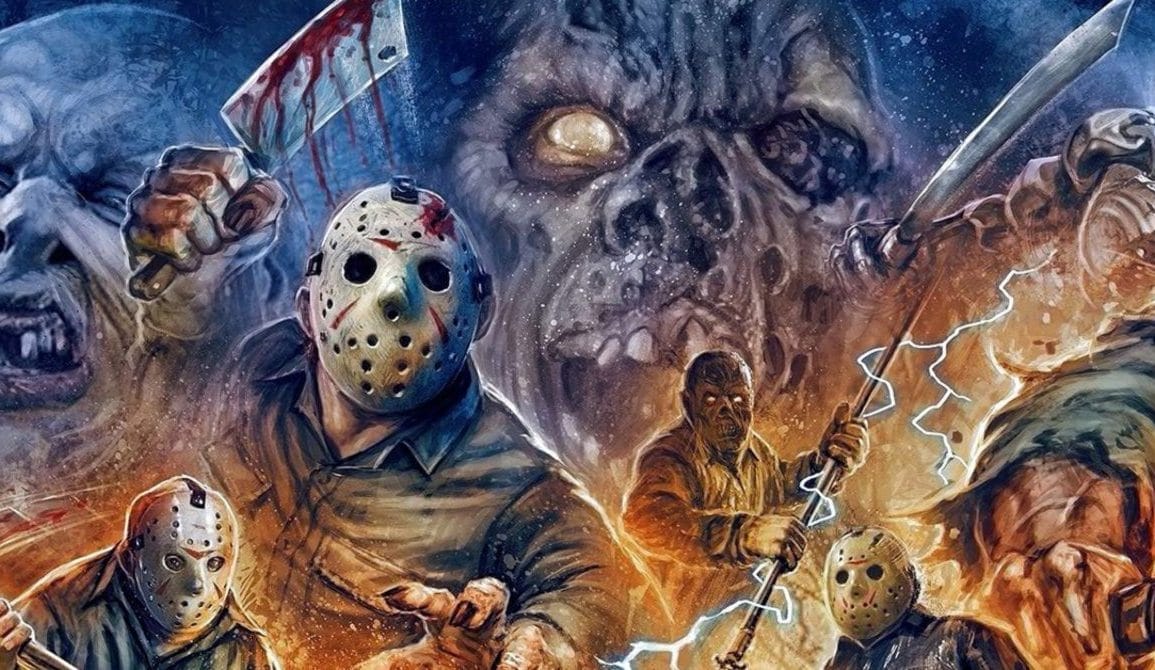 Disclaimer: This review is based on the initial set that was shipped out. Scream Factory has released a statement regarding issues with certain movies that fans have noticed: “Unfortunately, there were some unintended mistakes ...
8.3
Average User Rating
1 vote
Have Your Say!
Your Rating: 0
Submit
Write A Review