The extreme found footage film Making Off (France – 2012) by Cédric Dupuis and the experimental extreme film Ana (Canada – 2015) directed by Frédérick Maheux will be available for pre-order on monday, june 6, on the official websites TetroVideo and Goredrome.
Making Off comes in a Standard Blu-ray edition and in an Ultralimited edition numbered Mediabook + slipcover + 20pag booklet.
Whereas, Ana is the first official release by Goredrome Pictures and is available in a Standard edition (DVD + Blu-ray) and in an Ultralimited edition numbered Mediabook + 20pag booklet.
Written an directed by Cédric Dupuis (Like Every Morning), Making Off is a shocking extreme film starring Olivier Bureau, who plays a character named Cédric Dupuis, like the director.
He’s a fledgeling independent filmmaker who has set out to make the most terrifying horror film of all time. But shooting without any budget and with a cast of his friends, the young man soon realizes the frustration of indie filmmaking. The only way for him to get a realistic result is to unleash his imagination but he will fall into a spiral of depravity.
This is his documentary of the events that unfolded during the making of his film…
Making Off also stars Céline Berti, Mickaël Collart, Jérôme Thevenet, Nathalie Van Tongelen and Sébastien Ventura.
Considered “The best experimental film” by Marian Dora (Cannibal, Melancholie der Engel), Ana is written and directed by Frédérick Maheux (Art/Crime).
Ana is an experimental film about extreme female performances and the darker zones of the Internet. The film is presented as “an investigation of a cyber-sect linked to the disappearances of several women online”, a “moodboard of the aestheticization of self-destruction” and a “cyber occult thriller noise horror experience”.
In Ana, an individual investigates the disappearance of several online women. The missing people appear in encrypted videos hidden on the web, leading the protagonist in an esoteric puzzle he tries to decipher.
Catherine Allard, Clara Brunet-Turcotte, Rebecca Harvey, Mathilde Gesseaume-Rioux, Jean-François Lacoursière, Stéphanie Meunier, Yann Lapalme, Francis Ouellette and Viviane Paradis star. 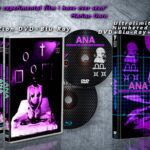 0 0
Previous ArticleEverything, Everywhere All At Once arrives July 5 on 4K Ultra HD, Blu-ray and DVDNext ArticleRed Cape Publishing to Release the Comedy-Horror anthology The Nookienomicon

Mai-chan’s Daily Life, Vore Gore and ROT are coming to Home Video via TetroVideo
06/10/2021
The Girl with the Cutter, Golgota and Jack the St. Ripper from TetroVideo available for pre-order
12/06/2021