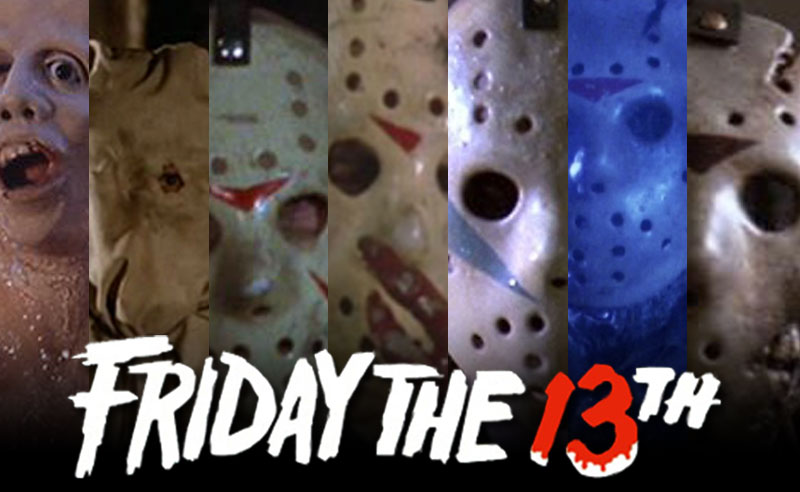 So we all love to rank the Friday the 13th films BUT what we really need to look at is just how formidable our most beloved of supernatural psychopaths really is from entry to entry. We here at HorrorFix decided to do all that nasty heavy lifting for you and rank the best and most powerful Jason Voorhees(es?) in the series!!! 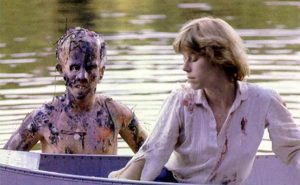 Sorry, Ari but Jason had little more to do than just rock the boat (get it?) in the original film that started it all. Although the site of a deformed, presumed dead child rising from the bowels of Crystal Lake is enough to leave the water a lil browner than when you went in, Young Jason is definitely not the source of raw power he becomes once puberty sets in.

Although this particular installment seems to be growing on the horror community, it still largely falls out of canon. For those of us who have been married and thusly divorced the concept of a demonic parasite roaming from host to host until if finds the ultimate vessel is a little old hat. The idea of Jason needing to hypnotize/possess in order to get them to consume his organs just seems to be too many working parts to really get the job done.

Strange that this Jason, which really isn’t even Jason at all, comes in two slots from the bottom instead of dead last. In all honesty, part V is a pretty worthy entry in the franchise even if it does have an impostor Jason. We get the continuing adventures of Tommy Jarvis and we even get a Scooby Doo ending. Moral of the story is: “Roy Burns knows how to get his revenge on” AND despite being a big ole wanna-be, the dude definitely knows how to handle a road-flare. 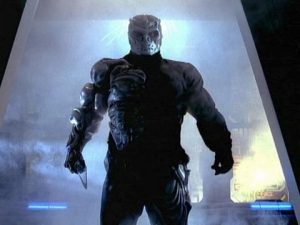 So, again, we are looking at another installment that just feels largely out of canon. I have much love for Jason X though. It’s self awareness makes it nothing less than an endearing entry into the franchise, BUT, with a story that’s more fan-fiction than anything else, its hard to rate Jason on this. If we rated it based purely on power, well…Jason getting turned into a nano-powered futuristic killing machine propels this one all the way up the food chain. In our own timeline, well, its just too speculative to rank realistically. But daaaaaaaaamn!!! Getting your face frozen with liquid nitrogen and then busted into a million pieces?!?!?! C’mon who dares say that that wasn’t one of the best Friday kill scenes E-V-E-R?!??! 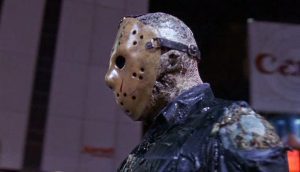 By the time we get to number 8 in the series (hmmm…also coming in at number 8 in our llist….coincidence?) Jason get a lil of the ole wanderlust and decides to finally leave camp without a permission slip. We do get some pretty decent kills in the big apple this time around along with a 1-on-1 winner take all bare knuckle takedown with Jason LITERALLY knocking his opponent’s block off..CLEAR OFF of his neck and shoulders. Putting the unhappy camper in a setting as big as Manhattan didn’t up the ante on Jason’s kill count as you might expect and clearly represented a challenge so far from home turf. A fun spin, but one that proved Jason is best at what he does when he’s where he should be. Also, how in the BLOODY HELL is he wet in EVERY scene??!?! Mrs. Voorhees might have made mom of the year on a few lists but she should told that boy he was gonna catch a cold!!!

If ever there was a case for Jason being a force of nature that stubbornly defies death to exact revenge on those that wronged his mama….its Freddy vs. Jason. Say what you will about this heavyweight dream match, but I loved me the shit outta some Freddy vs. Jason. Jason proved that when its crunch time he can pad the numbers by stumbling onto a teen drinking part in the middle of a cornfield and giving them all the ole 1-2 arterial spray…while still being ON FUCKING FIRE!!! So, with that kind of resilience why isn’t this Jason higher up on our list? Unfortunately Jason called in sick on the day they took the class to the smarts department. Jason, under the right circumstances can be manipulated and that is all too evident when Freddy gets into the big man’s dreams. 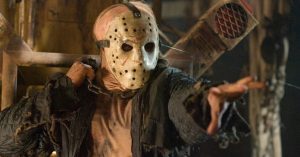 Let the hate begin!!! This is where my street cred definitely comes into question as I actually LIKED the reboot/remake/reimagining. As far as Jason goes, its been a while since we actually thought of the guy as resourceful. Some string, a few bells, an entire labyrinthine tunnel system and he’s golden, right? We did get a little back to basics with the 2009 Friday and that wasn’t necessarily a bad thing AND at the risk of sounding like a horrible misogynist… it does sport perhaps the best breasts of the series…jus sayin… 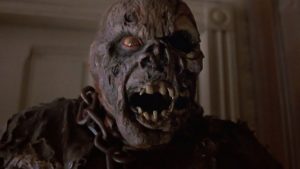 For all its goofiness, I do loves myself some Jason from part 7. It’s like The Fury, meets Friday the 13th set at a Uri Geller show. Jason is still pretty badass in this one minus the orthodontal nightmare fans were treated to when his mask splits in half. He is definitely now the unstoppable force that we have come to know him as and regardless of what the fans thought of this entry, the sleeping bag scene is a classic among the franchise. Unfortunately, throw a tarot card at the guy and he’s down for the count. It does make you wonder, “does Tina’s powers affect Jason more because of his own ties to the supernatural?” Hmmm food for thought…again, however, Jason really should just stay out of the water… 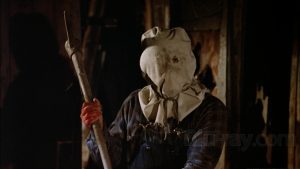 Potato Sack Jason Woooooo!!! I love Potato Sack Jason. I feel like the entirety of part 2 really is a training montage for the latter films; we get to see a young buck Jason, all full of piss, vinegar and lake water really cut his teeth on this whole murderous rampage business. We get a LOT of firsts in the second film..wait..yeah…machetes, unmaskings, one final hoorah when we all think the killer is dead. Unfortunately, Jason’s still a lil wobbly on his sea legs and doesn’t fair too well against a hit to..his shoulder…yeah, with mom nowhere in sight to lick the wounds, Jason is a little easier deterred in part two…probably largely due to his choice in cowls…a burlap bag…INT. Crystal Lake Grocery and General Store. Shop Owner: ” Well, I’m just plain flummoxed, Marcie. I could have sworn we had 3 potato bags yesterday when I did my annual potato inventory”…

If part 2 is our training montage, then part 3 is definitely our definitive coming of age story. part 3 is probably also my third favorite entry as well as being my third favorite Jason. Part 3 was not only release theatrically in 3D, BUT this is where the series starts to take off at breakneck speed. Friday and Jason both at this point start to become iconic and to herald the series really ARRIVING as an episodic horror staple and after the reveal in part 2, we know we are dealing with a very different nigh unstoppable killer. Jason appears a little more seasoned here and that stoic thousand yard stare is making its mark…plus…HOCKEY MASK. YES! This is our first appearance of Jason in what we would soon consider “full garb”

2. Friday the 13th: The Final Chapter

Now we’re finally getting down to brass tacks. Friday the 13th Part IV is the quintessential Friday film. Everything about it screams that the ante has been upped and in addition to both Crispin Glover and Corey Feldman (yes, this does start the Tommy Jarvis story arc) rounding out maybe the most sold cast the series had seen thus far, Jason really is at the top of his game. After an ax to the forward in the previous installment we are starting to get the idea that Jason is much MUCH more than he seems. Nigh unstoppable starts to tread on supernaturally omnipresent and we the audience realizes that escape, if slim before, is now damned near impossible. We have the hockey mask, we have the machete, THIS is classic Jason. Classic, however does have ONE big drawback that pushes this Jason out of the top slot…da lil guy still has some o’ doz mommy issues and eventually…its his undoing.

So, you might be thinking to yourself…”ARE YOU FUCKING KIDDING?!?!?!?!?! Shhhhh…deeeep cleansing breaths. Part 6 represents a lot of things to Friday fans, but most importantly, even die-hard purists are finding the love for this entry all of these years later. Jason Lives is a major shift in WHAT Jason is and the threat of just what Jason can do changes considerably. This is really the first film that squarely puts Jason in the realm of the supernatural. Ya see, Jason just isn’t a killing machine hell-bent on spilling blood anymore; with Jason Lives he’s officially an unkillable FORCE OF FUCKING NATURE. you might have thought he was hard to stop before but now you know your only chance isn’t to kill him, its just to incapacitate him long enough to get away. With Jason’t lighting infused Frankenstein-esque resurrection is now an almost supernaturally infused strength. The clencher? Jason’s one and only arch-nemesis was inadvertently responsible for bringing him back. Say what you will about the film’s goofier lighthearted moments, Jason Lives gives us a Jason REBORN that is truly the apex of his on screen personas!!