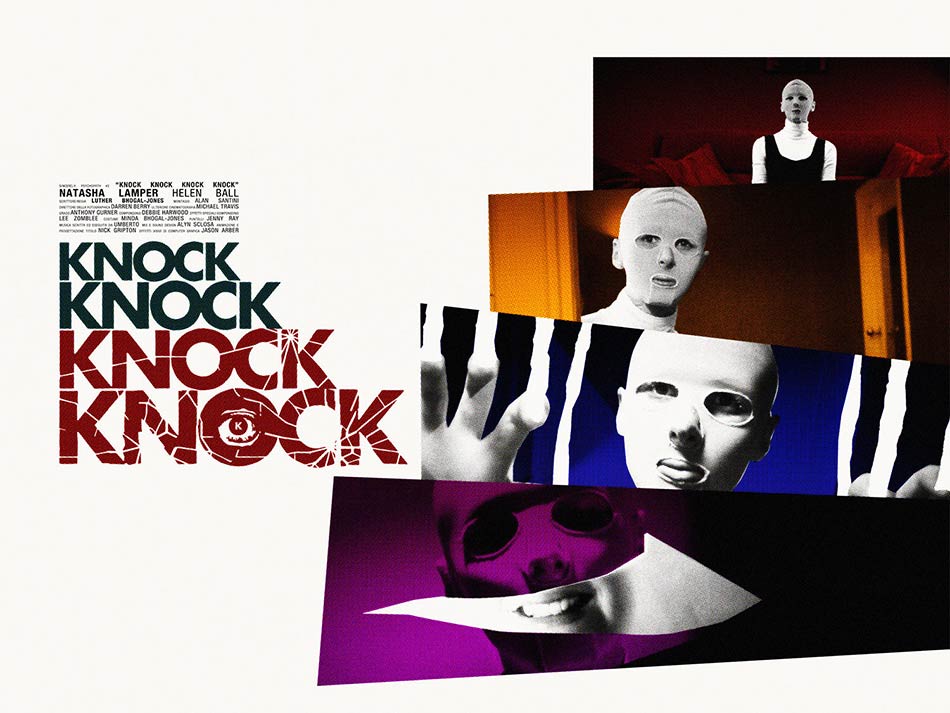 Following its premiere in Paris at the 24th L’Etrange Festival in September 2018. Faster Productions have now made their latest short film Knock Knock Knock Knock available to the wider public….if they’re interested enough to lift a finger!

Knock Knock Knock Knock is an unashamed homage to the Italian horror/ giallo films, with specific nods to the work of Dario Argento, Mario Bava and Lucio Fulci…but with a healthy dollop of the anything goes madness of Toho’s classic 70s horror Hausu also added to the mix.

In this short film – the 2nd in the Sincerely, Psychopath: Disposable Screams series (but not the 2nd to be made!) – Freya, a woman who has suffered from a nervous breakdown resulting in horrific self harm finds herself plagued by a knocking at her door – is there a genuine reason for this interruption or a result of the demons still loitering in her head?

Admittedly a wafer thin plot, but taking inspiration from Fulci’s quote regarding his masterpiece The Beyond (“It’s a plotless film…just a series of images”) this premise is the jumping off point for a succession of visually arresting moments.

Complementing these images and providing a similar experience for the ear is the exclusively composed soundtrack by rising musician Umberto, already a name on the synthwave/ darkwave circuit with his albums Prophecy Of the Black Widow, Confrontations as well as Night Has A Thousands Screams, his own score to the notorious trash horror classic Pieces.

However, in a reaction to today’s culture of being available to view everything instantly, Faster Productions has made the decision that anyone interested in viewing the film must email fasterproductions@yahoo.co.uk with the subject line 4KANDLES (a daft nod to the classic Two Ronnie’s sketch) to be sent a link to download the film.

Writer/ Director Luther Bhogal-Jones explains “We live in a wonderful world where a film can be available to view by a worldwide audience instantly, but with that as a film maker it feels like there’s a distinct loss of engagement with the viewer. Although I will inevitably lose viewing figures with this approach, I’m hoping it will be a result of quality of viewings over quantity.”

He will have to wait and see how successful this approach is and whether today’s internet audiences can, if not get off their arses, at least lift a finger to type. In the meantime, Faster Productions will be sending their recently completed puppet splatstick horror short Snore to festivals, as well as following a similar email-to-view approach to their fantasy/ thriller Goodnight, Halloween…before concentrating on their planned feature film about a legendary figure from the UK video game industry.