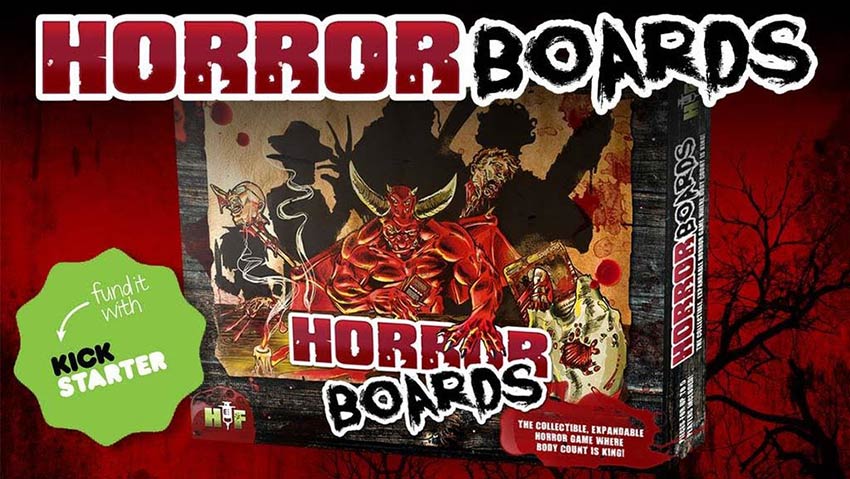 After a successful release of their commercial turned short-film, Horror-Fix is pleased to announce the upcoming re-launch of their Horror Boards Kickstarter campaign, on October 16, 2018 The new campaign will allow the public to finally see the newly created magnetic pawn-based combat system. Horror Boards is an expandable horror themed tabletop gaming experience, exclusively sold to Kickstarter supporters.

“We can’t believe this type of game has never been done before,” says Ash Hamilton, Game Designer of Horror Boards and Owner of Horror-Fix.com. This Kickstarter campaign will help us manufacture the units en masse so Horror Boards can arrive in homes across the world as soon as possible”.

Horror Boards takes horror genre events from the screen to our tabletop gaming fingertips by combining killing victims, finding weapons, fighting victims that just won’t die, plot twists, horror archetypes battling each other, AND teaming up to take out as many victims as possible at once. Horror Boards answers the age-old question of, “Who would win in a horror movie battle royale?”

“We’ve put a lot of blood, sweat, and tears into the making of this game. We think everyone who gets their hands on it will love it as much as we do!” says Chanell Hamilton, Project Manager.

Horror Boards is being produced by Horror-Fix, which has a history of running some of the most interesting and widely shared news and reviews of independent horror movies, books, and games. They have promoted many products of the independent horror genre, which contributed to them being successfully funded via crowdfunding. Now, they are proud to step out from behind the curtain, introducing Horror Boards directly to consumers. Horror Boards is more than a board game to Horror-Fix; it is their love-child 7 years in the making.