Beast Within, the new whodunit werewolf thriller, centers around a Gaming App launch party that takes a sudden turn when a murdered body is discovered.

The film features a talented cast of co-stars. Colm Feore (Thor, Chronicles of Riddick) who is hot off the hit show, The Umbrella Academy, which maintained the #1 spot on the Daily Top 10 for 15 days and set the record for the longest streak at #1 for any scripted show on Netflix. Ari Millen (Orphan Black) who is also starring in the thriller, The Oak Room, that just premiered at Fantasia 2020 and Holly Deveaux (Shadowhunters, The Mist). The project is co-directed by Chris Green (Zombie Werewolves Attack!) and Steven Morana and will be released in North America on demand everywhere September 8th by Stonecutter Media.

This ensemble cast includes Alysa King (Slasher, The Dwelling), Supinder Wraich (The 410, Guidstones), Art Hindle (Invasion of the Body Snatchers, Porky’s), and Katie Boland (The Bet, We’re All In This Together).

Originally set to have a theatrical release prior to the COVID-19 pandemic, this indie thriller had an award-winning festival circuit run where it screened in major North American cities including Los Angeles, New York, Chicago, Atlanta, San Juan, Tampa Bay, and Toronto.

Beast Within tells the story about a lead gaming developer, August (Steven Morana), who is looking forward to finally meeting his online girlfriend, Cheyenne (Holly Deveaux), at a launch party of the gaming app he developed. The festivities are interrupted by a priest (Colm Feore)who condemns the party guests as “marked for the beast.” Convinced it’s a publicity stunt, the party-goers disregard the protest until a dead body is found. August and Chyenne, along with the remaining guests, become players in a deadly version of the game. All are questioning who within the group could be the ferocious killer, as everyone is a suspect.

Watch and Share the Exclusive Official Trailer at (https://www.youtube.com/watch?v=ef1hHh3XS5c ).

A Build Character production in association with Little Axe Productions and High Star Entertainment, Beast Within was produced by Steven Morana and Nic Izzi (The Chaperone), the producer of the cult thriller, 1BR, that recently went number #1 on Netflix within 5 days of being released.

Executive Producers are Amy Williams (Rock, Paper, Scissors and Mothers and Daughters) Spero Stamboullis (Warning Shot), and Bruno Marino (Gridlocked). The gore and creature scenes in Beast Within were done for the majority as practical effects giving a very realistic raw feel. They were crafted by award-winning special effects make-up studio, The Butcher Shop FX Studio.  The entire soundtrack of Beast Within contains music tracks by the gifted rising hip/hop artist Arya Safakish (aka Afta Hill and Safakash). He has a dedicated fan base of over 100k fans on Spotify alone. 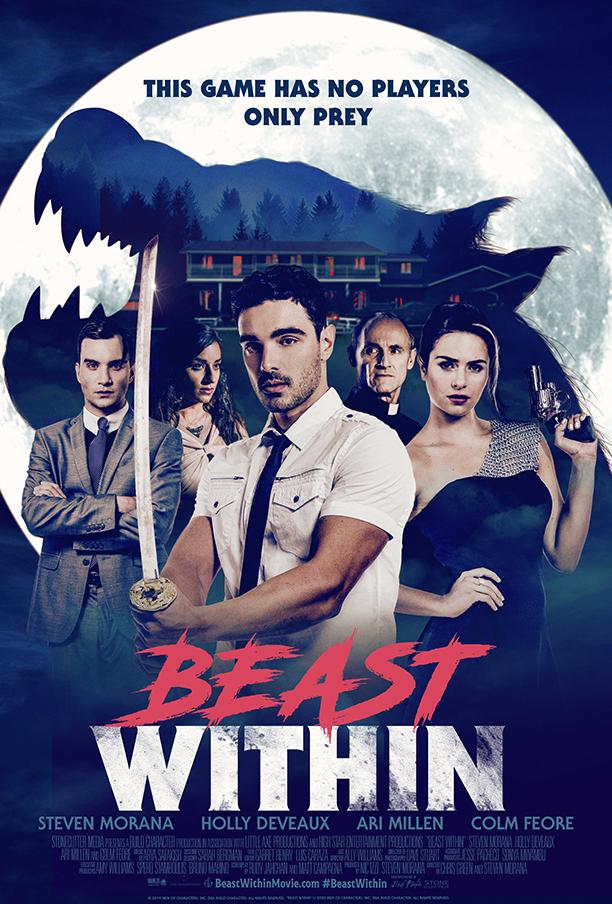