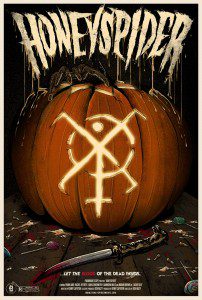 A new trailer for Kenny Caperton’s HoneySpider has been released. Details and synopsis of the film can be found below the embed.

HONEYSPIDER takes place in 1989 on Halloween day and follows college
student Jackie Blue as she slowly unravels, all while a mysterious
stranger watches over her every move. Soon she finds herself helplessly
trapped like prey in a spider’s web, and all she can do is try to
survive the night!

Billy Corgan of the iconic rock band The Smashing Pumpkins has
generously given the filmmakers the rights to use one of his early SP
tracks entitled “Honeyspider,” which inspired the name of the movie. The
film will also feature music from legendary music producer and singer
songwriter Gary S. Paxton, who arranged and produced the original Bobby
(Boris) Pickett and the Crypt-Kickers “Monster Mash” album.

HONEYSPIDER Plot Synopsis:
It’s Halloween day in 1989 and college student Jackie Blue wants to
enjoy a quiet birthday in the midst of a chaotic semester at school.
Her friend Amber has other ideas and persuades Jackie to come to the
annual Monster Mash party on campus after her shift at the local movie
theater. As murder plays out on the silver screen during the theater’s
Halloween night Horrorthon, Jackie falls under a strange spell, all
while a mysterious stranger watches over her every move. As the night
unfolds, Jackie slowly unravels and everyone around her is turning up
dead. Jackie finds herself helplessly trapped like prey in a spider’s
web, and all she can do is try to survive the night!