This week marks the 40th anniversary of the release of John Carpenter’s The Thing, and with it came a poster by Drew Struzan that has gone on to become an iconic part of cinema history.

When we produced the lenticular versions of Drew’s The Thing last year, we had a huge outcry of people who wanted the poster available as a screen print. Given that this year is the 40th anniversary, we felt what better time than now to oblige!

With that, we have worked with Drew Struzan and his team, Sep Lab and End Hymns, under licence from Universal Studios, to produce an official 24×36 screen printed version of this amazing poster.

The history of how Drew’s vision for the poster came about is well documented. Speaking in an interview back in 2012, Drew explained –

“It was a very odd experience. I got an immediate concept, which is not unusual for me; I usually have something roving around in my mind. I dressed up in a winter snow outfit and my wife took a Polaroid of me. This was 30 years ago, back in the stone age when the only way to communicating a hundred miles away was the telephone or the fax machine. So I did the drawing and I faxed it back to the studio and they said, “Fine. We need it by tomorrow morning.” I went to work. We stopped for a moment and I took some more photos with my wife, this time with a 35mm camera. She developed the film for me and I just started drawing, then painting through the rest of the day, then painting through the rest of the night. At 9 am a guy shows up at my doorstep and says, “Is the painting ready?” I had about an hour to go, so I finished painting it and he took it away. Since then it’s done more traveling than I have. [Laughs] It’s been around the world many, many times.” 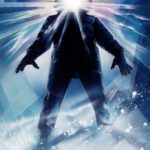