The cast and crew of EVIL DEAD THE MUSICAL will be hosting Las Vegas’ Season Finale Viewing Party. Presented by Fat
Beard, the WATCHING DEAD viewing party will be at SHAKESPEARE’S GRILLE AND PUB, 790 Coronado Center Dr, Henderson NV
89052.

The WATCHING DEAD starts at 8pm and continues until the last fan has gone home, typically around 2am. The entire
event is hosted by Sirc Michaels and the cast of EVIL DEAD THE MUSICAL, who will be on-hand to take pictures with
fans, give out prizes, host trivia, and more.

THE WATCHING DEAD is an experience designed with the FEAR THE WALKING DEAD fans in mind. A variety of WALKING DEAD
and zombie-related merchandise – much of it hard-to-find items – will be available for purchase. There are also added
elements of entertainment including rounds of WALKING DEAD trivia during commercial breaks, an ongoing raffle, and a
costume contest.

“THE WATCHING DEAD Viewing Parties have become an institution here in Las Vegas,” said Sirc Michaels, producer and
director of EVIL DEAD THE MUSICAL. “We’re excited that the parties have expanded to include the spinoff series FEAR
THE WALKING DEAD, which is an amazing series in its own right. It’s an entire evening of entertainment built around
one of the most popular television franchises on cable, for fans by fans, making this a unique experience you can
only get in Las Vegas, hosted by the BLOODIEST show on the Las Vegas Strip.”

To ensure everyone can see and hear the episodes, the venue is equipped with state of the art sound and screens. The
goal is to make sure there isn’t a bad seat in the house. Fans are encouraged to come early to claim their seats
before the episode starts.

WHEN
Sunday 8/23
8pm – ?
About EVIL DEAD THE MUSICAL
Endorsed by Bruce Campbell and embraced by Sam Raimi, EVIL DEAD THE MUSICAL is the official live stage show of the cult classic film trilogy. This award-winning production has been thrilling Las Vegas audiences since October of 2011. The show “slays” nightly at the V Theater inside Planet Hollywood Resort & Casino. More information about the show can be found at:http://www.EvilDeadVegas.com or by calling the box office at 866-932-1818. 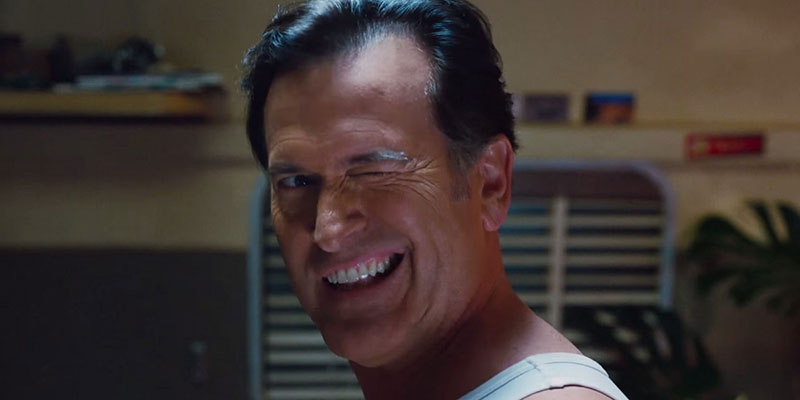