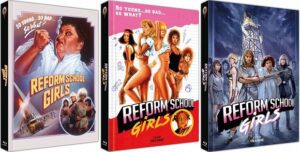 Since the beginning of filmmaking in the late 1800’s, films have brought to audiences many genres. I have been a fan of genre films since I was a child, although I didn’t know what a genre film was at the time. While I do like and appreciate drama films and high budget studio releases, there is something about that lower budget film that is oddly satisfying. The one constant with all forms of filmmaking has been to entertain an audience. Some films are pure forms of escapism. REFORM SCHOOL GIRLS is just such a film. REFORM SCHOOL GIRLS is a case of good girl, Jenny (Linda Carol), involved with a bad guy and gets sentenced to do time at Pridemore Reform School. Once inside, Jenny must choose which group to get into, become friends with Charlie (Wendy O. Williams), the inmate that runs life on the inside or fend for herself without Charlie’s protection. For horror fans this will be of interest, two of Charlie’s girls are Fish and Knox, played by Tiffany Helm and Darcy DeMoss respectively. Tiffany is known for her appearance in Friday the 13th: A New Beginning and Darcy shows up in Friday the 13th Part VI: Jason Lives. Sometimes video releases don’t happen quickly. This one took three years and was totally worth the wait. This mediabook is a Blu-ray/DVD combo pack that is available in three different versions. There are 444 copies of Version A, 444 copies for Version B and only 333 copies for Version C. All versions state that they are region B for the Blu-ray and region 2 for DVD. Both discs play in region A and region 1 players. The Wicked Vision release is the film’s high-definition world premiere. The mediabooks include a booklet that is designed to look like an eighties metal magazine complete with a poster and order form for REFORM SCHOOL GIRLS memorabilia. The articles/interviews are printed in German and English. In the United States, REFORM SCHOOL GIRLS was first released on VHS and Laserdisc, as well as DVD years later. It has been quite a while since those releases and the premiere on Blu-Ray is a great improvement. The 2K transfer was produced from an interpositive. The film has good detail, with grain that is neither obtrusive nor distracting and has a very cinematic look. I did not notice any major print damage. There is not a very vivid color palate in REFORM SCHOOL GIRLS, mostly gray, blue and black. When bright colors do appear, they look bright and strong without bleeding or blooming. Flesh tones look natural and there are numerous opportunities to judge the flesh tones. The black level is good without being overdone and in dark scenes there is good contrast, so nothing is too dark. The viewer can see everything. No signs of edge enhancement or banding. There are four audio options on this release. The first is a German DTS-HD Master Audio 2.0, second is an English DTS-HD Master Audio 2.0 for the movie’s soundtrack. The dialogue is clear, the music and sound effects are well balanced. The two remaining audio tracks are reserved for two different commentaries. One vintage commentary track from director Tom DeSimone and humorist Martin Lewis. The remaining audio track is a newly recorded second commentary track from Ash Hamilton from Horror-fix.com and yours truly. Although both commentary tracks are a great bonus, I may be biased, but the Horror-fix track is my favorite of the two. We had a lot of fun recording the track. We wanted it to be informative as well as light-hearted laugh at the film. The numerous bonus features really round out this combo. There are newly recorded interviews with Tom DeSimone, Howard Wexler and Tiffany Helm. All the interviews are informative as well as entertaining. Several trailers are included and most have been restored with the original versions present also. If you have not seen the movie yet, it would be a good idea to watch one of the trailers to understand the mood of the film. Three TV spots are included along with introductions from Sybil Danning and Tiffany Helm. The music video for the title track, a photo gallery, and an Easter egg, that is worth the search. Everything that is present on the Blu-Ray is also on the DVD except for the Easter egg. Many people may dismiss a film like this and not give it a second thought. This is an over-the-top satire of women in prison films. To me this is the peak of the WIP genre. No other film has captured the attitude or execution like this movie. You are not supposed to dig deep into REFORM SCHOOL GIRLS for a deep meaning. It is just about an hour and a half of entertainment for entertainment’s sake. It is life behind the iron, where every day could be your last. If you feel this movie is for you, don’t delay, this was produced in this special edition in limited quantities. REFORM SCHOOL GIRLS can be purchased from: https://www.wicked-shop.com/en/reform-school-girls-2-disc-limited-collector-s-edition-no-45-mediabook-cover-a-limited-to-444-units.html https://www.wicked-shop.com/en/reform-school-girls-2-disc-limited-collector-s-edition-no-45-mediabook-cover-b-limited-to-444-units.html https://www.amazon.com/Reform-School-Girls-Blu-Ray-Combo/dp/B09CLJBN1B/ref=sr_1_1?crid=1JJWRBYM5TOB&dchild=1&keywords=reform+school+girls+blu+ray&qid=1630795189&sprefix=reform+schoo%2Caps%2C178&sr=8-1 https://www.diabolikdvd.com/?s=reform+school+girls

So many times, when you watch a movie, you hope it will be an experience that will make you want to re-watch it. With WE GOT A MONKEY’S PAW, we got a winner. This short film has a running time of 8:32. The film is not short on entertainment. Jakki (Jakki Jandrell) and Zack (Zack Ogle) are best friends living in an apartment. Zack has a love of all things occult and Jackie seems to have gotten tired of his enthusiasm for his artifacts. She keeps turning Zack down for plans that evening until he says he has a monkey’s paw. Jakki cannot wait to start using the monkey’s paw. Does no one ever learn when it comes to a monkey’s paw? As you can guess bad things begin to happen and that is when the laughter starts. This movie is over the top and great ride. It has a short running time, but it delivers with comedy. There are mombies (yes, I said mombies), time paradoxes, possessed stuffed animals, dolls that cry blood, a demon box and a catchy end credits song. The two roommates soon realize that they are over their heads with wishes gone bad. Try as they might, it seems as if this may be the end. However, one thing situation they created at the beginning may be the key to getting things back to normal. During their fight against the living dead and various other horrific situations they get into, Zack discovers Jakki is moving out of their apartment. If they survive and get out alive, Zack will have to find a new roommate. That is scary all by itself. This film is well acted, well written and funny. The director, Aaron Pagniano, has delivered a great film and the editing is terrific. I would rate this at 8.5. I have watched it three times and look forward to watching it again. Time is running out. Will Jakki and Zack survive and if so, who gets the dishes when Jakki moves out?

Movies put us into a time and place. Horror movies are meant to put us in situations that we as viewers, are glad we do not actually have to endure. A movie should get you into the story quickly. THE DEAD ONES puts you in a bad place from the first frame. The viewer learns very quickly that the main characters are being punished for things they have done and have one task to complete, (clean up a school) to pay their dues. The four characters, Mouse, Scottie, Emily and Louis are being supervised by Ms. Persephone, but it does not keep them from wandering off while they are cleaning the school at night, when things are scarier. Soon each of the four notice that they are being locked in the building by four cloaked and masked figures outside the school. The four call themselves the Four Horsemen of the Apocalypse. The Four also lock themselves inside. They do not seem to care if anyone sees them. As the movie progresses, more and more details come to light. The mess is not just simply a mess. There are flashbacks and the only way to know when a flashback is occurring is by the tint of the shot. The film is surreal. The visuals will make you believe the poster’s tagline; High School Is Hell. Not everything is explained and does not have to be to tell this story. The characters are well written and acted. Katie Foster stands out in her portrayal of Emily. Emily is insane and at times the viewer forgets she is acting. All of the characters have been cast very well and the film has a look all its own. Symbolism in THE DEAD ONES along with good direction keep the viewer’s interest to the end. There is a bit of a twist at the end and the meaning of the title, THE DEAD ONES, becomes apparent. Clocking in at about seventy-three minutes, it makes for an easy viewing. Some movies feel as if they overstay their welcome, but not this movie. The director knew how long it took to tell the story and paced it well. I recommend this movie. 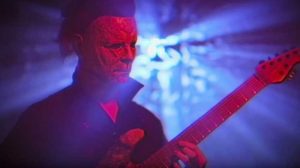 Don’t Fear the New Year or The Reaper in this Awesome Blue Oyster Cult Halloween Tribute!

In 1978 there was no MTV.  I have always wondered what a music video for John Carpenter’s Halloween with Blue Öyster Cult’s Don’t Fear the Reaper would’ve been like. Since video editing is part of my daily work, I decided to create one.  This video is created with the idea that it should be a good balance between BÖC’s 1976 hit and Carpenter’s breakout film.  I hope you enjoy this treat from Horror-fix.  Happy New Year!

The summer is well under way and movies have been steadily rolling out for the season. Every year movies are released with the studios banking heavily on them. While many films come out, some films get lost in the wake of the major releases. A number of good movies get missed and don’t find the audience they should. THE DEAD DON’T DIE is one of those movies. The film takes place in a small town called Centerville. The town and the rest of the world are seeing the results of polar fracking. Earth is tilting off its axis. Things begin small with ants being affected. Cats, chickens and cows disappear. If that’s not bad enough, the dead begin to reanimate. Who can save Centerville from the zombie horde? Bill Murray, Adam Driver and Chloë Sevigny are the police officers that make up the first line of defense against the undead. Bill Murray solidly inhabits the sheriff character and is a joy to watch. Tilda Swinton is a sword wielding Scottish Ninja mortician who takes out her fair share of zombies. In addition to these well known actors, Tom Waits, Iggy Pop, Steve Buscemi, Rosie Perez, Danny Glover, Carol Kane and Selena Gomez are welcome additions to the cast. It is something a little different from zombie films. There is a social message in the movie as well as dry comedy, overt comedic situations and the film has a great look to it, directed by veteran filmmaker Jim Jarmusch. I really enjoyed this film. I went into it with no preconceived ideas and just went along for the ride. I recommend this film to anyone one who loves horror films and has a sense of humor. I give THE DEAD DON’T DIE a 7.5 out of 10.